British operator Three UK said at the London Technology Week that they will cooperate with Huawei to launch 5G network in the country. Erol Hepsaydir, Head of UK RAN and Equipment Technology, delivered a speech at the Technology Show. He said that the company will use Huawei’s network equipment. Interestingly, on the previous day, the carrier just announced that it will launch a 5G network in the UK in August. This is going to be “the fastest 5G network in the UK.’ At least, the operator belives in this. 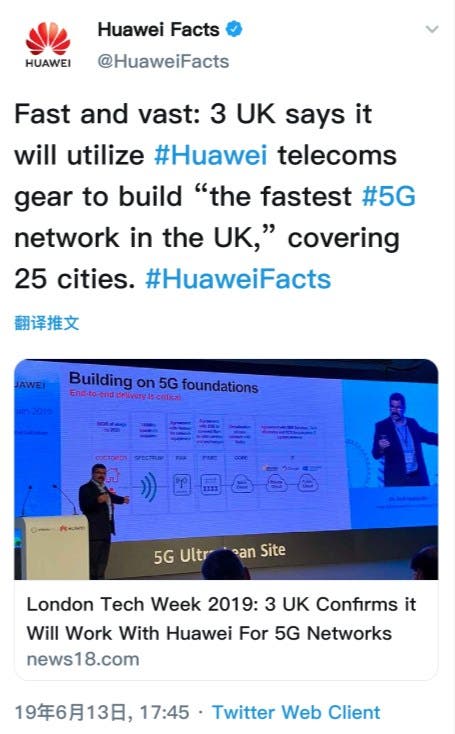 Reportedly, Three UK will become the third operator to launch 5G services in the UK. Prior to this operator, EE has launched a 5G network, and Vodafone UK also confirmed that it will launch a 5G network in August. After the US imposed a trade ban on Huawei, both EE and Vodafone said they would no longer offer Huawei Mate X 5G handsets in their product lines. But it is expected that this operator will offer this handset to its customers.

Hepsaydir also believes that the 100MHz 5G spectrum bandwidth is the ideal bandwidth for 5G mobile networks. If the operator uses 100MHz bandwidth, it will be able to provide a speed of about 340Mbps. If the bandwidth is more, the download speed will be faster, and it is expected to reach 2.5 times faster speed. The UK currently has a 140MHz bandwidth.

Three UK currently has 10 million users in the UK, and they use an average of 8.3GB per month. The average traffic usage of 5G is expected to increase up to 90GB by 2025.