A new high-end Samsung tablet was spotted earlier in the database of the well-known Geekbench benchmarking platform with Qualcomm’s Mobile Platform Snapdragon 855, So the time for Galaxy Tab S5 may be near.

It is not the first time that we hear about a new high-end Samsung branded tablet, as early as last month the first interesting information about the two models SM-T860 and SM-T865 had been leaked, which should correspond to the Wi-Fi variants and Wi-Fi + LTE of the expected and talked about Samsung Galaxy Tab S5.

Now we come back to talk about it again since the protagonist of the new sighting on Geekbench is precisely one of those two models, namely that SM-T865 which should correspond to the Wi-Fi + LTE variant of the new flagship tablet of the southern Korean giant. 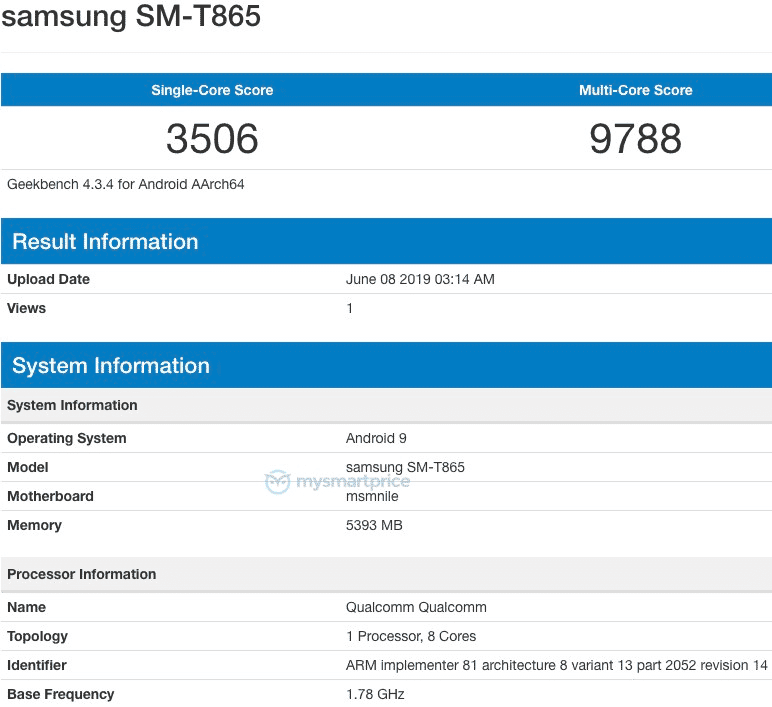 Geekbench, as you can see from the image shown above, reveals in fact that the alleged Samsung Galaxy Tab S5 can count on the Qualcomm Snapdragon 855 Mobile Platform at 7 nm and 6 GB of RAM, in short, a suitable hardware for a “sofa” use but also for something more productive. No surprise regarding the operating system on board this new tablet: Android 9 Pie, which of course also means Samsung One UI. As for the scores obtained by the device on Geekbench, there is talk of 3,506 points in the single-core test and 9,788 points in the multi-core test.

Net of a part of the technical sheet that is still shrouded in mystery, we recently told you also about how Samsung is preparing to say goodbye to cutting 64 GB of memory on high-end tablets, which starting from the next model, maybe even SM-T865, will start directly from 128 GB of internal memory. There is also talk of the presence of the S-Pen stylus for more productivity.

Since the Galaxy Tab S4 was launched in August last year, Samsung could meet the same deadlines for the new model or postpone its debut to the 2019 edition of the IFA in Berlin (scheduled for September).