Today, Huawei smartphone product line president He Gang issued a message, ‘We are about to become the world’s first smartphone brand with two 7nm SoC chips’. This is a direct suggestion that Huawei is going to launch a new 7nm chip, and we assume it’s the much-talked Kirin 810 based on a 7nm process node.

Huawei is on everyone’s lips not only due to its outstanding smartphones but also due to the HiSilicone series chips. As you know, there are not many mobile chip makers. And Huawei is among them. What’s more interesting, due to the billions of investment and huge efforts, this company could make a tough competition for such giants as Samsung and Qualcomm. Its Kirin 980 SoC provides a performance that is almost identical to the most powerful Qualcomm Snapdragon 855. Apple fans will say it has nothing in common with the A13 chip, but it’s quite another topic of conversation. 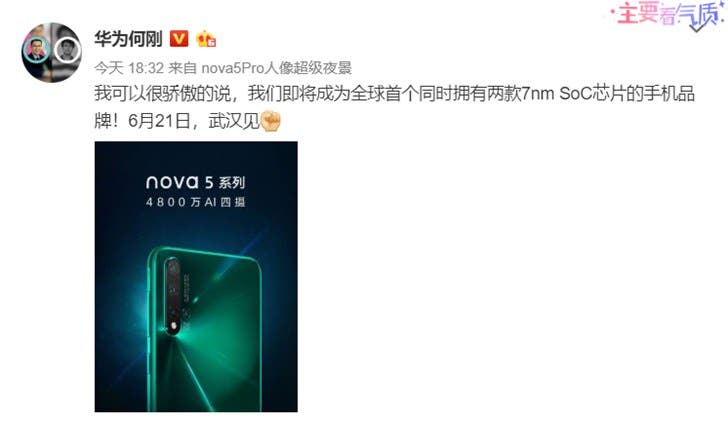 According to the previous news, the HiSilicon Kirin 810 will adopt the new 2 x A76 + 6 x A55 architecture. The chip will be also equipped with the ARM Cortex-A76 custom large core and Mali-G52 GPU. We guess no one doubts it will use TSMC 7nm process. Therefore, the performance will be way better than that of the previous generation Kirin 710.

The first smartphone to sport this chip is assumed to be the Huawei Nova 5. The latter has managed to appear on various benchmark sites, showing a decent specs list. Among them, we should mention the quad-camera module on the back and a 7nm Huawei chip (as you guess, this is going to be the Kirin 810). At the same time, the phone is said to have a Pro variant. This handset should be packed with the current flagship SoC Kirin 980. The rest of the key features include a 2K screen and four speakers.

Next Xiaomi mocks the notch extolling the Xiaomi Mi 9T