Just now, iQOO officially announced a new machine for iQOO series – iQOO Neo. As we can see on the poster, this new phone adopts a vertically placed triple-camera on the back as well as a drop screen design. Undoubtedly, this phone will also support screen fingerprint solution. Previously, it was reported that iQOO would push a cost-effective Snapdragon 845 model. But we are not sure if it is the Neo. 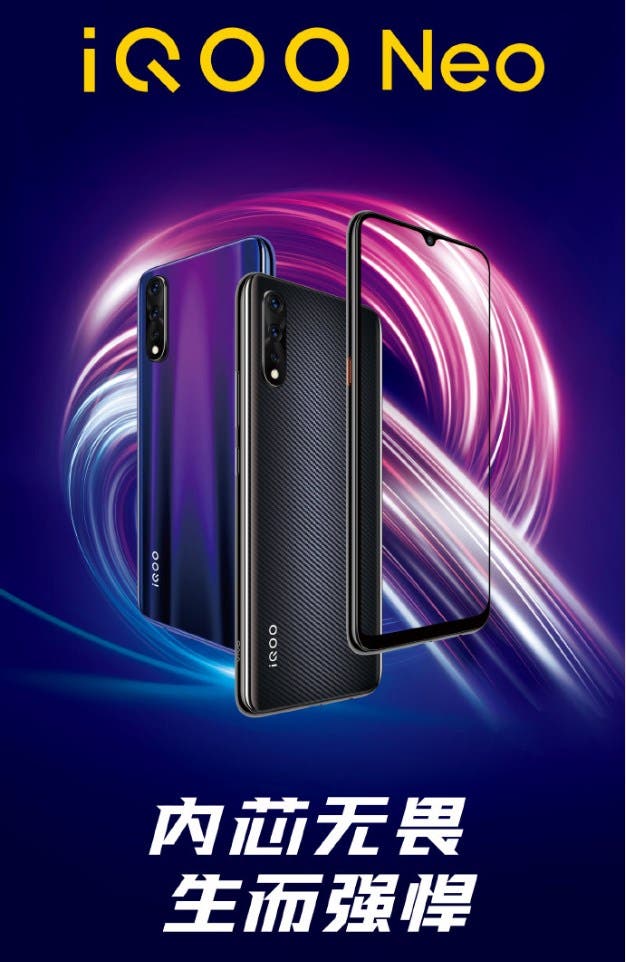 In fact, we are not familiar with the IQOO Neo smartphone. So it’s logical we have no information concerning its highlights. Maybe the key features of the current iQOO device could be useful in this situation.

Under the hood, the first-gen iQOO phone is equipped with the Qualcomm Snapdragon 855 flagship platform. CPU performance is increased by 45%. Thus, it provides a more stable and smoother performance. The chip is paired with up to 12GB large memory as well as a 256GB large storage. Such a powerful smartphone requires a better cooling system. VIVO understands this and brings a new ‘super liquid cooling’, which uses liquid high-temperature evaporation. The principle of heat and low-temperature liquefaction exotherm is based on repeated cycles. They ensure efficient heat transfer and thermal conductivity of up to 10,000.

As you can see, VIVO’s new brand is capable of making outstanding smartphones. But the original iQOO handset was considered as a flagship phone. So maybe the upcoming iQOO Neo will belong to the lower category.

Next CHUWI MiniBook released on Indiegogo, prices starting at $399