Getting rid of the notch is now the ultimate goal of every phone makers. The pop-up modules, punch hole, and even the notch are some of the most recent trends, but all could be fading away too quickly, as a more acceptable and a seamless solution is in the offing. OPPO could be at the forefront of the next innovation, as it announced through a tweet last week that it’s working on an under-display selfie camera.

While we expected the new tech to make its debut in a real-life smartphone, the firm has today announced an event for June 26 at the MWC 2019 Shanghai. The event poster first sighted by Mysmartprice clearly suggest a smartphone with the under-display camera tech will be showcased at the event. Though it is more likely it will be a prototype device and not a market ready one. But given OPPO’s penchant for innovation, it won’t be long before it is pushed to the mass market.

We are not exactly sure how OPPO’s under-display camera works, we, however, Oppo’s VP Brian Shen in a Weibo post hinted that the optical quality of the under-the-display camera will have “some loss” at this stage, but he pointed out that every new technology takes time to perfect. That is an indication that the tech from OPPO might not be ready for mass production yet. 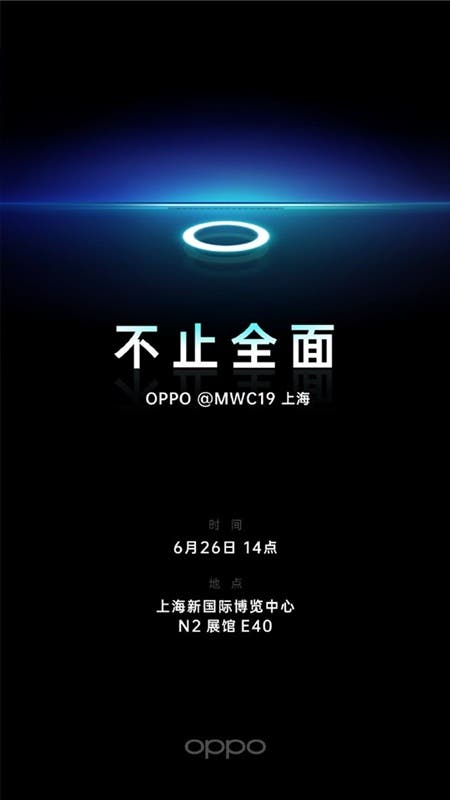 We’ve always been big fans of all screen smartphones, and relocating the selfie camera to under-display in addition to the under-display fingerprint scanner could make for a true ll screen device. Still, we wouldn’t want to raise our hopes so high just yet, until a proper presentation on the said date.

Aside from OPPO, Xiaomi has also found a solution to ending the notch era, as it showcased a prototype Mi 9 with the hidden camera compared with a regular model. Although the firm has yet to reveal a proper launch date for this, but given the leak and teaser, we are certain plans are ongoing for its proper unveiling.