Counterpoint’s latest report said that in the first quarter of 2019, the global high-end smartphone market shrank by 8%. When saying high-end smartphones, the source takes into account all the models with a price tag of $400 and higher.

Among them, Apple’s shipments fell 20% year-on-year. In part, the shipments of the Cupertino-based company has fallen because buyers held the iPhone for a longer period of time. Now, they replace their iPhones in averages 3 years, while in the past, it was 2 years. Another factor affected Apple’s shipments is drastically dropped sales in China. However, Apple still has the highest share of 47% in the high-end smartphone market. 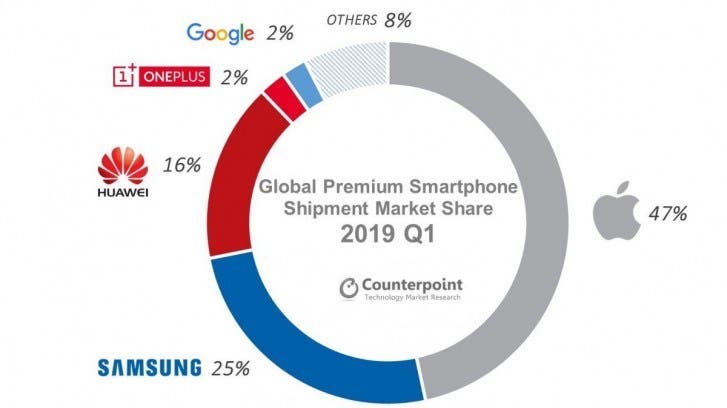 North America remains the largest market for high-end smartphones (30%). It is followed by China (26%). The Chinese market was weak in the first quarter, which is another major factor in the shrinking of the global high-end smartphone market.

Huawei ranks third in the high-end smartphone market and surpasses Apple in China. High-end smartphones account for 18% of Huawei’s shipments and are the most profitable part. However, due to the trade ban, Huawei will have to reduce its future marketing and R&D budget.

Samsung has benefited from the ‘conflict’ of Apple and Huawei. One-fourth of the high-end smartphones shipped in the first quarter in the world are Samsung phones. Analysts said the Galaxy S10 is considered more value-for-money than the iPhone series. This has helped Samsung consolidate its largest share of the high-end market in the past 12 months.

We should also mention that China’s OnePlus has a big market share as Google, 2%. In fact, OnePlus has gained its place in the premium segment. It continued to hold its position in the top five globally backed by OnePlus 6T. OnePlus has been steadily growing in Western Europe. It also held the second position in the premium segment in India, and the OnePlus 6T remained the best-selling premium smartphone during Q1 2019 in the country. This brand has held the title since its launch. OnePlus also entered in top five in the North American market in Q1 2019. By the way, this was the second consecutive quarter when OP featured amongst the top five brands in the premium segment globally.