Xiaomi Redmi sub-brand is reportedly planning to launch its ultra-affordable smartphone – the Redmi 7A outside of the Chinese borders.  The Famous leaker Roland Quandt revealed a few hours ago that the Redmi 7A Global is ready to debut for the European market and has already been sighted at some retailers in Eastern Europe.

Still signaling its Global rollout, the affordable Redmi7A has now been certified in a number of Global markets as revealed by DealandTech.  The device as per the source has now been certified by the EEC (Eurasian Economic Commission), IMDA in Singapore, TKDN in Indonesia and NBTC in Thailand suggesting an imminent widespread launch. 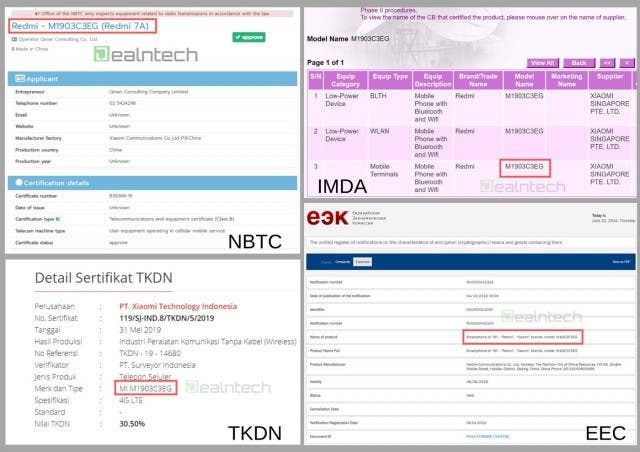 Aside from the Redmi Go, and the standard Redmi 7, the Redmi 7A is one of the most affordable devices in Xiaomi’s Redmi lineup of smartphones. The Redmi 7A lacks the fingerprint scanner but supports basic Face Unlock.  It was first launched back in May in China as a more affordable variant of the Redmi 7. It comes with the Snapdragon 439 chipset, 2GB/16GB, and 3GB/32GB of expandable storage, a4000mAh battery, a single 13 MP rear camera, and a 5.45-inch HD+ (1,440 x 720) display.