The Moto E6 design was already teased last month thanks to a leaked render. Today another high-quality render popped out revealing a little more about device’s design with a textured back.

The new image comes as a courtesy of the reputed leakster, Evan Blass. It corroborates the previous leak which showed the Moto E6 with a tall screen, thick bezels, and a single-rear camera placed in the upper left corner. The back of the Moto E6 also counts the Motorola logo. However, it’s unclear if it has the fingerprint reader embedded in it. One time that last year’s Moto E5 has an FP scanner, we don’t think that Lenovo’s subsidiary will remove it. 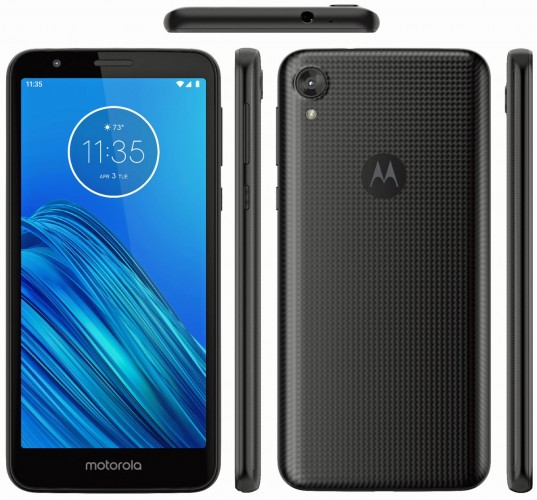 The Moto E6 has the power key and volume rocker on the right, with the headphone jack placed at the top. The bottom part of the smartphone isn’t shown in this render. We imagine that it will house the speaker, primary microphone, and micro USB port. The Moto E6 is expected to ship with Snapdragon 430 coupled with 2GB of RAM and 16GB of RAM. The battery inside should be a 3,000mAh unit, which is 1,000mAh less than last year’s Moto E5.

Motorola is yet to disclose more details about the smartphone and its release date. Hopefully, we’ll know more about this entry-level smartphone in the coming days. Worth noting that the device has paid a visit to FCC last month, meaning that a launch isn’t too far from happening.