The Shanghai MWC19 has begun in earnest, with 5G related and a plethora of breakthrough announcements already flying in. While Lenovo owned Motorola may not be showcasing a new tech breakthrough, the brand through its Weibo post has announced it will be revealing the rumored Motorola P50 at the event in the coming days.

Although no specific date has been confirmed, the announcement poster only has the official Shanghai MWC19 date -June 26-28, suggesting the MotorolaP50 could launch in the coming days.

Speaking of the P50, the Chinese arm of Motorola following the official debut of the Motorola One Vision earlier in May teased the launch of a new smartphone in the country for June. The teaser, too, had no exact date but did confirm the device will be dubbed the Motorola P50. The P50 that appears in the teaser poster reveals striking similarities with the recently unveiled One Vision, so it is safe to assume Motorola is simply re-branding the One Vision to suit the Chinese market. 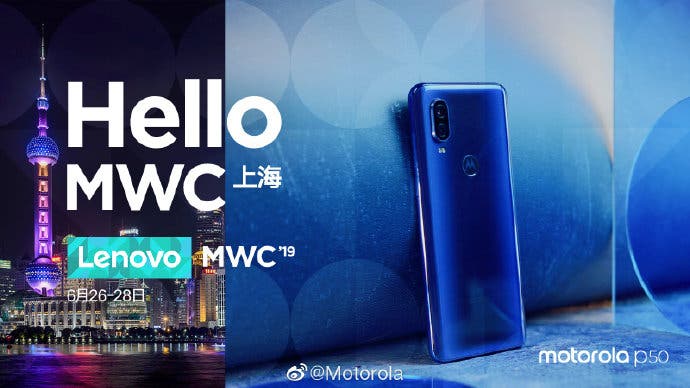 Assuming the Motorola One Vision is re-branded for China as the P50, they are both expected to share the same designs and internal, and that means it could retain the  6.3-inch Full HD+ display, with 21:9 aspect ratio CinemaVision LCD screen, a 25-megapixel in-screen camera with 1.8µm Quad Pixel technology for sharper selfies in low-light, and of course, the new Exynos 9609 processor.