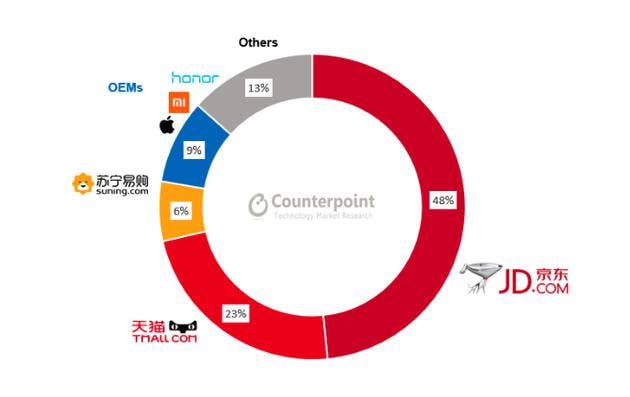 As Zhang Mengmeng, a research analyst at Counterpoint Research said, Jingdong and Tmall are still the top two smartphone online sales platforms in China. The two giants together accounted for more than 70% of online smartphone sales. However, their share declined slightly in the first quarter of 2019 because there were no promotions and the spring offline channel performed more strongly.

In addition, third-party app platforms have played an important role in the smartphone market. More popular apps such as Pinju, Vipshop, and Xiaohongshu have begun to be available on various smartphone brands. Due to the large user base, these applications cannot be underestimated as a marketing channel. At the same time, some third-party applications also bundle smartphones and other products. For example, Vipshop puts Daniel Wellington watches and VIVO iQOO together.

The Most Popular Smartphone Brands Sold Through Online Channels 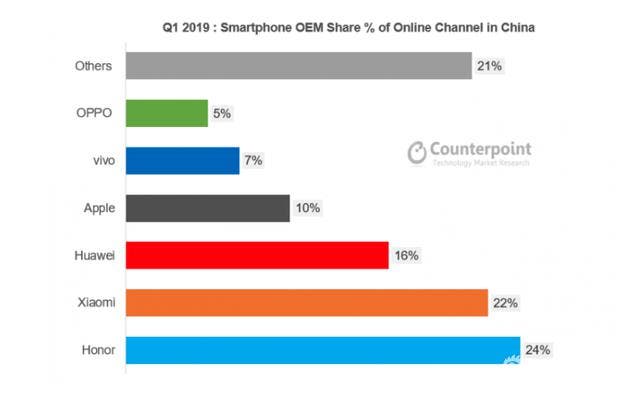 Huawei’s online market share increased in the first quarter, and it tried to strengthen its online channels in the case of a slowdown in the overall market. Both have opened myriads of online channels. As a result, the borders of these brands have begun blurring.

Xiaomi’s online market share has increased, mainly due to the launch of Redmi Note 7, a very cost-effective product. It is the first smartphone launched after the Redmi brand became independent.

Next Xiaomi Mi A3 arrives pretty soon, still as a rebadged CC9e