According to a new leak, the Indian variant of the vivo S1 will mark the premiere of MediaTek’s Helio P65 chipset. Let’s try to avoid confusion here: This particular vivo S1 is being developed for the Indian market, and shouldn’t be confused with the vivo S1 for China which ships with different specs. Apparently, Vivo’s naming team is running out of ideas. 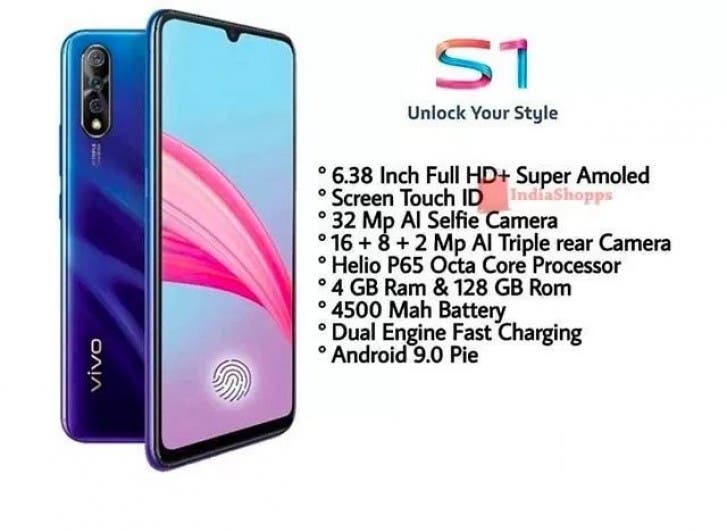 The vivo S1 for India will debut the Helio P65 alongside 4/6GB of RAM and 128GB of Storage. It boasts a 6.38-inch FHD+ AMOLED display with a fingerprint scanner embedded into it. Camera-wise it will have a 32MP selfie camera inside the waterdrop notch. On the rear, there’s a triple-camera setup composed of a 16MP main camera, 8MP ultrawide and 2MP depth sensor. The handset will boast a massive 4,500mAh battery with dual-engine fast charging and Android 9 Pie.

The smartphone leaked in the wild, through a couple of photos showing its glory. Furthermore, it’ll be a rather affordable smartphone at INR 20,000 (€250) and should be launching in early August. When it comes to the Chinese variant, it arrived with a Snapdragon 675 and a notchless display thanks to the 32MP pop-up selfie. Let’s see how customers will deal with this difference in specifications.

Previous Xiaomi Mi A3 officially teased, to offer better value than the Mi A2