There are only a few weeks left until the Korean giant Samsung reveals its 2019 S pen touting Galaxy Note 10. So we aren’t a bit surprised at the influx of leaks and the past few days. And aside from the Galaxy Note10, rumors have it that we will also get to see the Galaxy Watch active 2 at the event, even though a recently leaked road map only suggested Samsung launching the Galaxy Watch 2 in the 3rd quarter.

We are still not sure we will get to see the Samsung Galaxy watch active 2 at the event. However, we have got a new leak that reveals the first official-looking renders of the much leaked Galaxy Watch 2 active. We have seen quite a lot of leaked images/renders of the upcoming smartwatch, but the official-looking renders clearly gives us a better look.

There is no denying the fact that this is the real Galaxy Watch active 2, as it looks typical of Samsung’s promotional image which displays the device along with the style of branding that will be in use, while also once again confirming the name of the device. 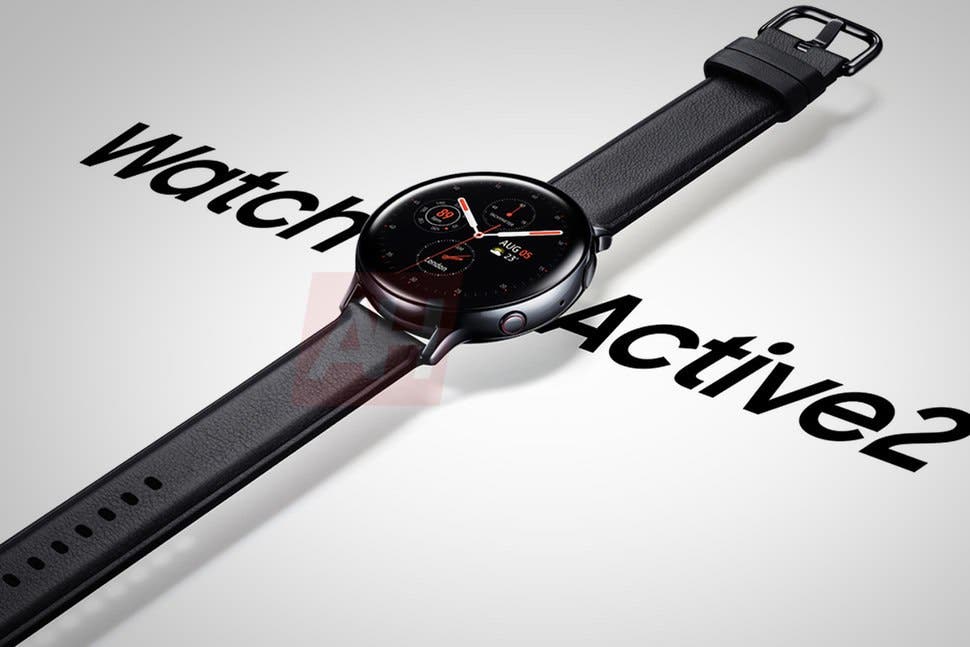 The renders don’t confirm any of the specs, but it does further confirms that the watch got the same look like the original Galaxy watch active. The Watch active has only been in the market for a short while, and that raises the suspicion that the Active2 might not be ripe for launch yet.

Unlike the standard Galaxy watch active that only launched with the silicone straps, the render suggests the Active 2 is likely to launch with a leather strap, perhaps with the silicon straps option. It will come in in two sizes – 40mm and 44mm. And in three colors – black, gold and silver, and with Wi-Fi-only and LTE models. The rendered unit is black, and likely the LTE model.

The render has a power button on the side with a red ring, though we do not sure what that signifies. Beyond the design, the Active 2 could offer ECG, Fall Detection, perhaps with some exciting new features.

August 7th is the widely plausible launch date. Although a pre Galaxy Note 10 launch is an option if the August 5th on the render is any Indication.