Motorola seems to have found a sweet spot with its One series of smartphones as is evident by the number of such devices it has churned out in the past year. The One Vision is the brand’s latest Android One device, and rumors are rife that up to 3 more are in the making. The Motorola One Action is one of such.

We already brought you leaked specs and images of the devices. It has also cleared a number of pre-release certifications, and now, the device has received Android certification from Google. The software giant has now uploaded the phone’s profile to the Android Enterprise website. That is a strong signal that it might be released soon.

As we’ve previously seen, the listing has an image of the device with a look that same look as the Motorola One Vision. The listing doesn’t give us a look at the device from the rear, but it does confirm it has a fingerprint sensor. And from what we know so far, the sensor is located at the rear panel. The rear is also home to a triple camera setup comprising of 12.6MP main sensor, and a wide-angle lens. 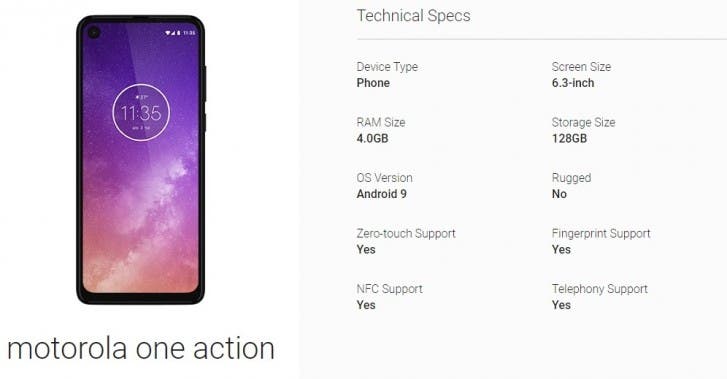 We are not sure when the device goes official, but that should happen soon, given the many leaks.

Previous Huawei To Launch a Pop-Up Camera In India Soon

Next OUKITEL Y4800's launch on July 22nd is closing by