The Huawei Nova 5i Pro has been a long time coming. It was earlier expected to launch alongside the Nova 5, Nova 5i and Nova 5 Pro earlier in June, but that never happened. Now, following countless leaks and teasers, the company has now confirmed the official launch date of the device.

As per the official teaser, the Huawei Nova 5I Pro launches in China on July 26 at about 16:08 PM. Recall that July 26th is the same date the Chinese firm set out to announce the Huawei Mate 20 X 5G for the Chinese market.

The brand also released a brief teaser video that confirms a few design elements of the upcoming device. First off, it confirms the Huawei Nova 5i Pro adopts a punch-hole design for a 32-megapixel selfie snapper. And more interestingly, the video shows it has a quad-camera setup on the rear panel. As revealed earlier via TENAA listing, the Nova 5i Pro has a 48MP main camera. And in addition to that is an 8MP + 2MP + 2MP cameras, all arranged is a square module.

It employs the same CPU on the recently unveiled Honor 9X and 9X Pro – the entry-level HiSilicon Kirin 810. The CPU will be mated with either 6GB or 8GB of RAM and feature up to 256GB of onboard storage. 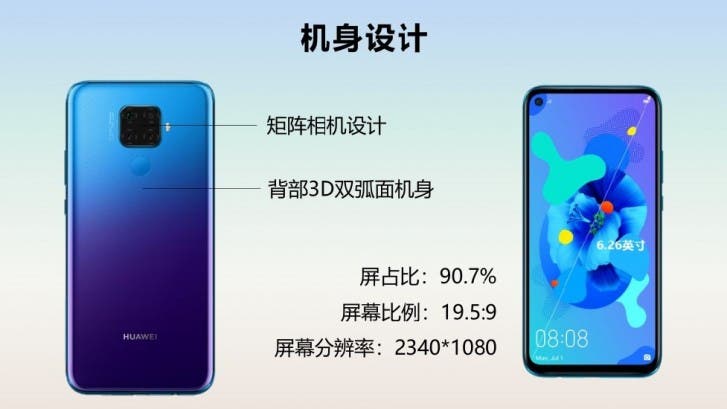 Huawei Nova 5i Pro pricing and launch outside of China

What remains unknown at the moment is the Nova 5i Pro Pricing, perhaps that’s the only secret left. When launched in China, the Huawei Nova5i Pro is tipped to launch in other markets as the Huawei Mate 20 Lite. Although we are not sure how soon that will happen.