Nokia recorded an increase in revenues in the second quarter of 2019 exceeding forecasts. The Finnish network infrastructure manufacturer has attributed the success to the growing demand for next-generation 5G equipment. Although the company has defined the beginning of 2019 as very slow and weak. It expects a strong Q4 thanks to the increase in customer demand for 5G networks.

“Demand is strong in the main 5G markets, in the United States and Korea”. Said CEO Rajeev Suri, adding that the 5G market will begin to develop this year in Japan. Alongside with the Middle East, China, the Nordic countries, Italy and the United Kingdom. Nokia said it had 45 5G commercial offers.

Nokia counts Sweden’s Ericsson and China’s Huawei as its main rivals. And some analysts say Nordic firms may benefit from challenges faced by the Chinese group after Washington accused Huawei of activities contrary to national security, a charge Huawei denies.

Q2 revenue is better than expected 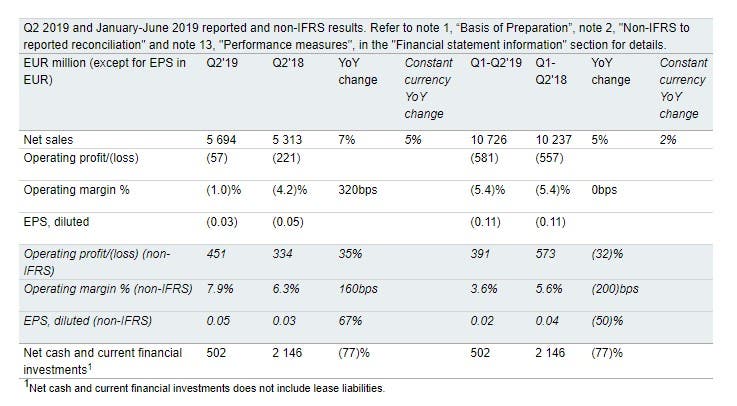 In the April-June quarter, Nokia reported earnings per share of 0.05 euros. Up from the 0.03 euros of the Refinitiv forecasts. Nokia said that Q2 revenues were up 7% compared to the same period last year, supported mainly by growth in North America. With 5.69 billion euros, the producer’s revenues exceeded the analysts’ average forecasts set at 5.43 billion euros.

As already mentioned, Nokia sees the future a little brighter than in the past. The telecommunications networks sector has faced a slowdown in demand since sales of 4G networks peaked. The situation could soon change thanks to a new cycle of updating networks for the diffusion of 5G technology.