Canalys came up today with another of its researches for the smartphone market. The research firm disclosed details about the performance of the top OEMs competing in the fierceful market of India.

Counterpoint research covers the second quarter of this year and shows that the smartphone market slumped 0.5%. This is a result of feature phone users reluctance in upgrading to smartphones. The data further confirms Xiaomi lead at the top of India smartphone market. The Chinese firm has kept its spot as the largest smartphone vendor in India in terms of shipment volume. Interesting enough, it’s the eighth consecutive quarter that the company repeats this feat. 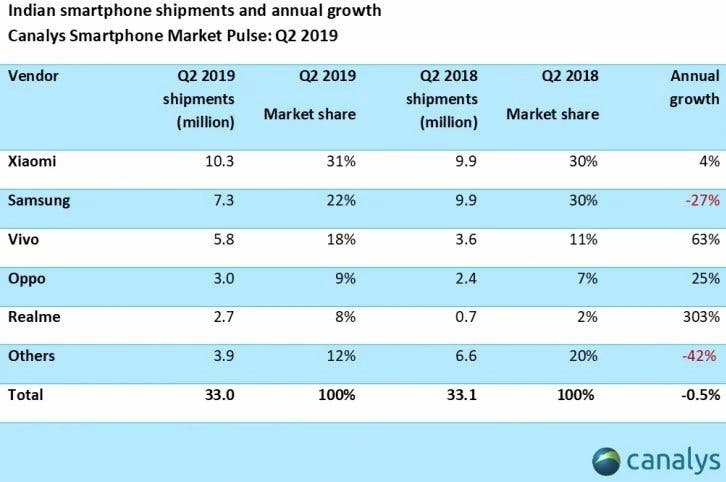 Xiaomi shipped an estimated 10.3 million smartphones in Q2 2019. These numbers are slightly higher than the 9.9 million units shipped in the same period last year. Xiaomi is followed by its fellow Chinese brands – Vivo recorded a massive increase in its sales by 63%. Oppo and Realme, that are part of the same BBK group along with Vivo, saw an expressive growth during the quarter. When it comes to Vivo’s performance, it flourished in the INR10,000 – INR15,000 price category. The sales’ boost was a result of the excellent performance of Vivo Y17 and Vivo Y91. 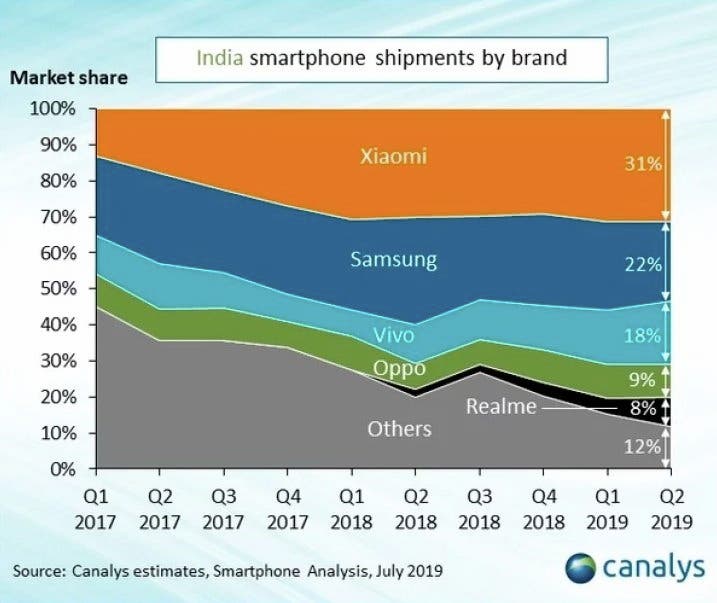 Samsung remains as the second-largest smartphone vendor in India. Despite this fact, the company has experienced a decline in sales during this quarter. According to Canalys, Xiaomi controls 31% of the market while Samsung manages to achieve a 22% market share. Worth noting that almost the entire smartphone market in India is controlled by the top 5 brands. Their numbers combined accounted for 88% of market share, that represents an 8% year over year increase.

Read Also:  Oppo A16 to hit India later this month

Canalys states that users who upgrade their entry-level handsets to midrange devices are the ones generating positive results.