Just like several other Samsung A-devices, the Galaxy A70 came lacking a specific Night Mode for the camera. This resulted in sub-par quality for night shots. Interesting enough, the device’s night pictures were actually worse than some of its cheap A-siblings. Thankfully, Samsung is rolling out a new update that brings Night Mode for the A70.

The new firmware not only includes the new camera Mode but also updates Android security bulletin to July 2019. The software bears the A705GMDDU3ASG6 version number and weighs in at 367 MB. The update is currently live in India but should make its way to other countries in the coming days to weeks. 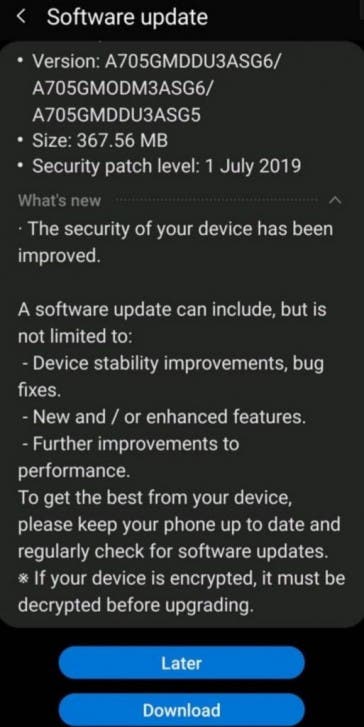 Moreover, Samsung has also added a dedicated QR scanner in the camera interface. Of course, the usual batch of performance improvements and bugfixes is also included in the package. Although Samsung didn’t specify which bugs have been fixed. Worth noting that the last update provided by Samsung for the Galaxy A70 was the target of huge criticism. After all, it came with a couple of bloat apps. These apps can be uninstalled, but still, it was an unprecedented move from Samsung.

Hopefully, the new update won’t bring more than the features specified by the changelog.