That’s not a surprise when we see Huawei giving different brandings to some of its smartphones depending on the market. Now we have another example of this with the successful Honor 20 that will reach Thailand as Huawei Nova 5T.

The globally available Honor 20 which carries YAL-L21 the model number has received certification in Thailand under the Huawei nova 5T moniker. The handset will also be the first Nova smartphone to appear outside of China. 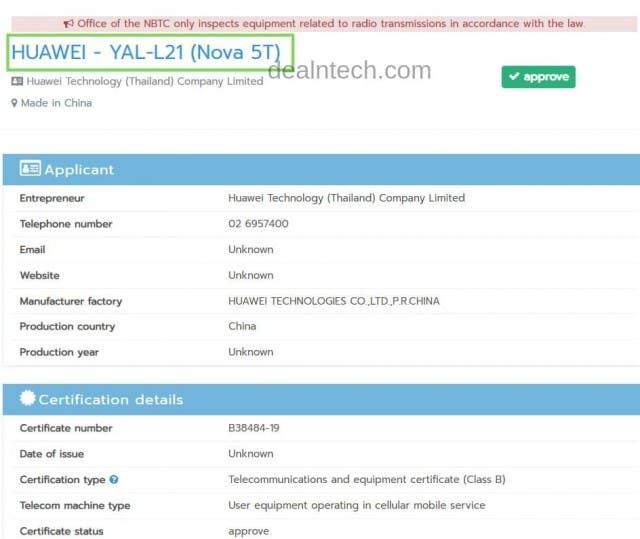 The Honor 20 was initially released with four cameras on the back and an eye-catching display with a punch-hole for the selfie snapper. While it has some differences over its Pro sibling, the handset still ships with the powerful Kirin 980 chipset. The handset was announced back in May, but Huawei was in the middle of a struggle with the US government.

Eventually a month later, the phone made its way across the globe, including markets in Europe, Eurasia, and the Middle East. Worth noting that the phone costs around $500/€500. However, in Malaysia, a country neighboring Thailand, price starts from MYR1,699. That amount converts in about $410.

The handset ships with Android 9 Pie with Magic UI 2.0. Huawei already promised to update the handset to Android Q after it gets available. Let’s how the premium handset will perform in Thailand.

Next Redmi will launch a smartphone with MediaTek Helio G90T SoC