Redmi will produce a smartphone with MediaTek Helio G90T. One of the two SoCs that make up the G90 family, specifically designed for gaming. The chips were presented just over 24 hours ago. And the first benchmarks placed them roughly on top of Qualcomm’s Snapdragon 730. The news was spread by Redmi itself through its official Weibo account; unfortunately, there are no precise details on the device, but we know that it will be available globally.

For some days there have been rumors and official confirmations about an upcoming Redmi smartphone with a quadruple rear camera and a 64 MP main sensor, data compatible with the Helio G90 specifications. There are indications that it is the same device. 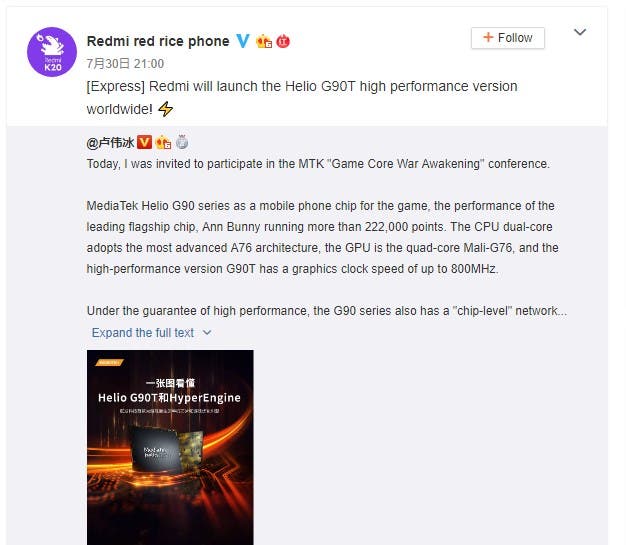 It is true that these SoCs are not as prestigious as the top of the range. Such as (Snapdragon 855 / 855 Plus, Kirin 980 …). But it will definitely have an audience that wants to have a good performance fo low price.

It is worth to mention that the Helio G90 and G90T are the first gaming performance-oriented SoCs engraved in 12 nm FinFET. They both ship an ARM CPU Cortex-A76 + Cortex-A55 octa-core clocked up to 2.05 GHz. Alongside with an ARM Mali-G76 3EEMC4 GPU up to 800MHz. It supports 10GB RAM LPDDR4X, camera sensors up to 64MP and the ability to record videos in 240 fps.

The challenge of MediaTek is to offer gaming solutions on the entry or the mid-range, with of course the limits that it imposes. Recall that Xiaomi will be first to launch MediaTek Helio G90 chipset-based smartphone in India as said TL Lee, General Manager of Wireless Communication at MediaTek.

Previous Honor 20 will be released in Thailand as Nova 5T