A recent research report by Strategy Analytics, Q2 global smartwatch shipments in 2019 increased by 44% year-on-year to 12 million units. According to the report, Apple Watch ranks first with 46% of the global smartwatch market share. Samsung is back second place while Fitbit fell to third place. Strategy Analytics senior analyst Steven Waltzer said, “…smartwatch growth continues to soar because more consumers now use fitness wearables as an add-on to their smartphones.” 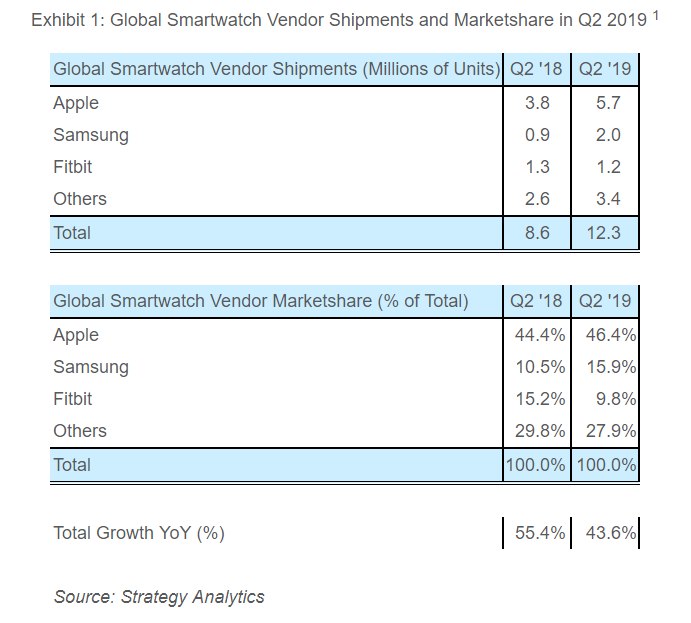 Neil Mawston, Executive Director of Strategy Analytics, added, “Apple’s smartwatch global shipments have increased from the 3.8 million in Q2 in 2018 by more than 50% of the average to 5.7 million in Q2 in 2019. Apple Watch is still far ahead of its competition. Apple Watch avoids fierce competition from the likes of Fitbit. This is probably why it still clearly lead the smartwatch market.”

In 2019, Samsung’s global smartwatch shipments were 2 million units, more than double the 900,000 a year ago. In the past year, Samsung’s global intelligence watch market share jumped from 11% to 16%. Samsung is now the world’s second-largest smartwatch manufacturer. Its latest models, such as Galaxy Watch Active 2, will enable Samsung to consolidate its position for the rest of the year.”

Fitbit global smartwatch shipments fell from 1.3 million in Q2 in 2018 to 1.2 million in Q2 in 2019. This quarter, Fitbit’s global smartwatch market share is 10%, a 15% drop year-on-year. In the high-end market, Fitbit has been struggling to compete with Apple. Fitbit needs to take action quickly to achieve recovery because Samsung and other competitors increasing the pressure.