For a long time, Samsung launches two flagship models in each half of the year. The Galaxy S line smartphones hit the market in the first half, while the Galaxy Note phones come in the second half. We have already witnessed the success of the S10 line. So it’s the right time for the Note handsets. Tonight, the Samsung Galaxy Note 10 was announced. As you guess, there have been two variants – the Note 10 and the Note 10 Plus. Both are very powerful and look outstanding. Let’s dig deeper.

No need to think about the Galaxy Note 10 Plus as the larger version of the original model. It should be taken as the direct successor of the Note 9, while the Note 10 is a new direction in the company’s line. In fact, both handsets come with very powerful features. Say, the more compact version sports a 6.3-inch AMOLED screen, while its sibling features a larger screen of 6.8 inches. However, if the latter also comes with a ToF sensor and a microSD card slot, the original version doesn’t. Generally, both handsets look quite stylish. On the one hand, they inherit the Galaxy series design language. But on the other hand, they have got a new breath. On both sides, the Galaxy Note 10 line smartphones carry curved glass. The middle frame is made of polished aluminum. Moreover, the company offers a variety of color options – Aura Glow, Aura White, and Aura Black. These colors are common for both models. But there are the Aurora Pink and Red versions for the Note 10 and the Aurora Blue for the Note 10 Plus. 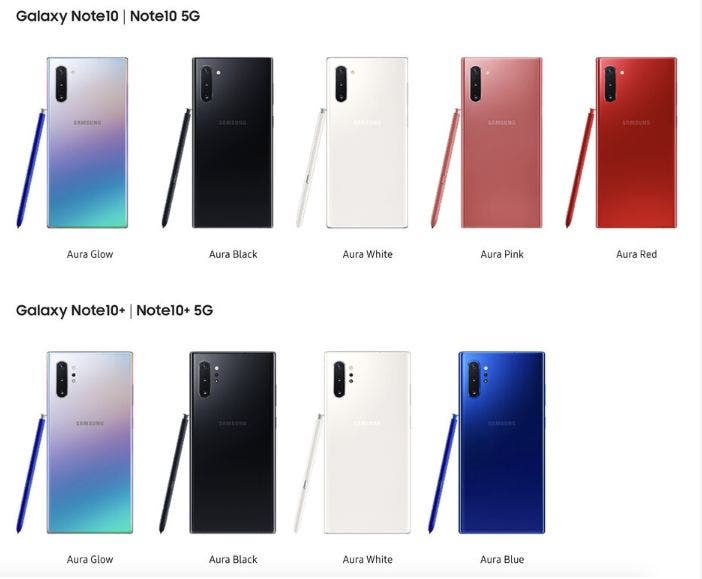 The front camera is placed in a hole, which is placed in the upper middle area of the screen. This selfie shooter has a 10MP resolution. On the back, we can see different camera modules. The 12MP + 16MP + 12MP triple-camera has not changed since the S10. But this camera comes with new features that make better. Among them, we should mention the Love Focus Video (this is Samsung’s name for portrait mode). This feature works better on the Samsung Galaxy Note 10 Plus due to the ToF camera lens. Plus, there is an interesting feature called AR Doodle. You can basically draw over the subject using the S Pen, and the drawings will move along with the movement of the person. 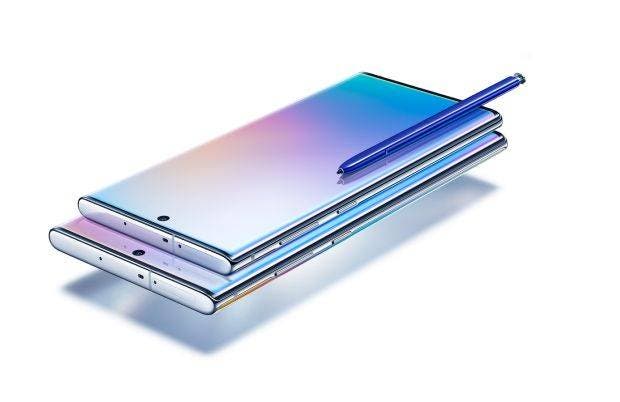 However, the Samsung Galaxy Note 10 is packed with a smaller RAM of 8GB. Its sibling comes with a 12GB memory. Both models sport a 256GB storage. Plus, there is a 512GB for the larger variant.

In terms of the battery capacity, the Samsung Galaxy Note 10 sports a 3500mAh battery, while the Plus version comes with a 4300mAh battery.

This series has never been cheap. The Samsung Galaxy Note 10 is no exception.

The Note 10 and Note 10 Plus should go on sale in most markets on August 23, though you can start pre-ordering tomorrow.

Previous Motorola One Zoom (One Pro) camera details get leaked