According to AppleInsider, smartphone market analysts said that Apple’s iPhone Q2 shipments in Europe decreased by 1.3 million units, down 17%. At the same time, shipments of Android phones such as Xiaomi and Samsung have grown considerably. 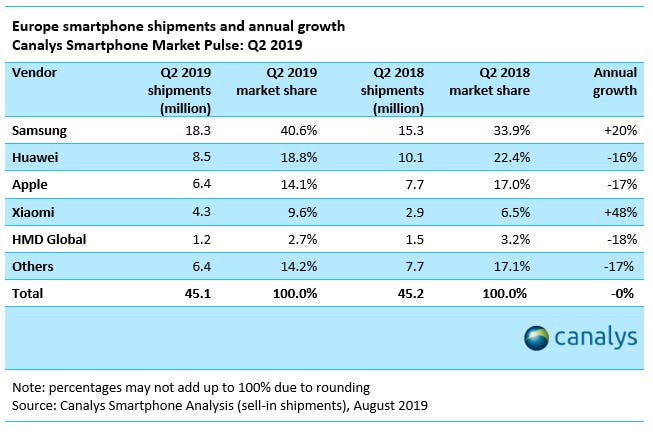 The results presented in this report are similar to the conclusions of another analysis represented at the end of July. According to the latter, Apple sold a total of 36.4 million iPhones worldwide in the second quarter of this year, down from 41.3 million in the same period last year. Overall, the Q2 shipments in the smartphone market fell by a total of 1.2%, and global shipments of smartphones in the second quarter were 360 ​​million units.

Canalys’ report shows that in the second quarter of this year, smartphone Q2 shipments in the European market totaled 45.1 million units, down about 100,000 units from 45.2 million units in the same period last year. This means the European smartphone market compared to the other regions in the world is more stable.

However, the data in this report may be confusing. As you should know, Canalys monitors the sales of all smartphones, regardless of the price. Moreover, Apple gets more revenue from the sales of a single iPhone. So this comparison is not fair.

In terms of competition, Samsung still topped the list. In the second quarter, its phone shipments in the European market reached 18.3 million units, up 20% year-on-year. Plus, its market share increased from 33.9% in the same period last year to 40.6%. Canalys believes that the increase in Samsung’s shipments should be attributed to the company’s product strategy shift, the company’s strategy from focusing on operating profit to focusing on winning back to market share. In addition, problems between Huawei and the US government have also provided opportunities for Samsung.

Behind Apple is Xiaomi, the company’s annual growth rate reached 48%. The second-quarter shipments were 4.3 million. And the market share rose from 6.5% in the same period last year to 9.6%.