Xiaomi Mi 9 has been one of the most successful devices launched by the Chinese brand this year. However, the Asian giant has decided that it is the time to give something more to its users. And that is why it will launch a version of the Mi 9 with 8 GB of RAM and 256 GB of storage. And if you want to know more about this new launch of Xiaomi, do not miss this article.

In February of this year, Xiaomi launched its Mi 9 in China in two versions: one with 8 GB of RAM and 128 GB of storage and another of 6 GB of RAM and 64 GB of internal memory. But apparently, 128 GB storage has not been enough for some of the brand’s fans. Therefore, the Chinese manufacturer will launch, this August 14, a new variant of this smartphone with 8 GB of RAM and larger storage of 256 GB.

The launch will initially take place in China for a price of 3,299 yuan, which would amount to about $465. In addition, the brand has announced that the first buyers of this new version of the Xiaomi Mi 9 will take a 27W Qi portable charger. 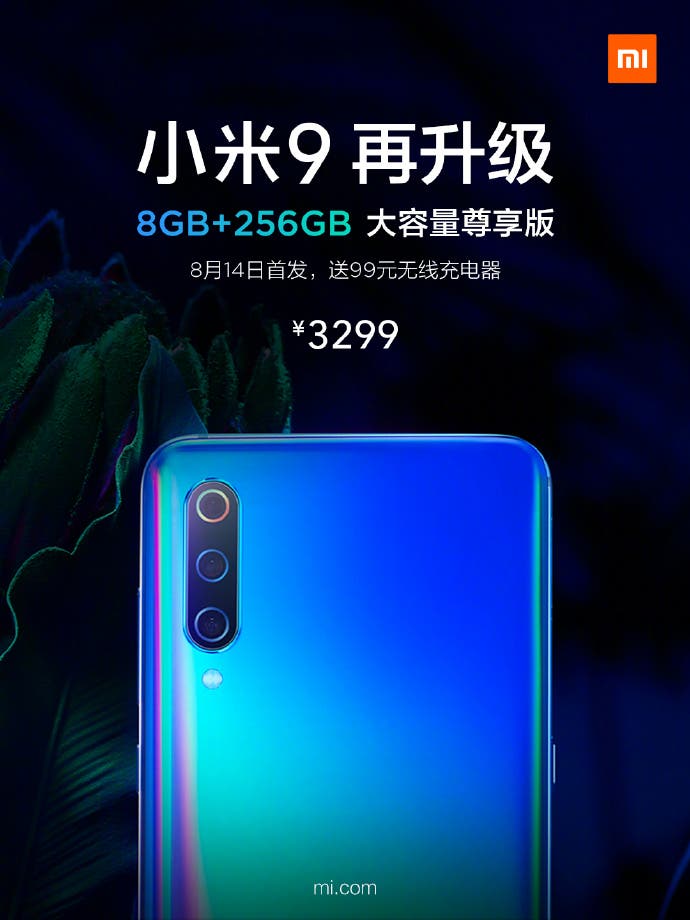 The Xiaomi Mi 9 features a 6.39-inch S-AMOLED screen with a drop-shaped notch. With a Full HD + resolution of 1080 x 2340 pixels and an aspect ratio of 19.5:9 and protected by a Gorilla Glass 6. The operating system used is Android 9 Pie with MIUI 10. It does not have a microSD card slot. It is equipped with a Snapdragon 855 processor and a 3300 mAh battery with 27w fast charging and wireless charging. The device also has an on-screen fingerprint reader.

The front notch features a 20 MP front camera with HDR and an f/2.0 aperture for perfect selfies. On its back, it has a triple camera system with LED flash with 48 MP main sensor (f/1.75). A 12 MP telephoto secondary sensor (f/2.2) with 2x optical zoom. And 16 MP tertiary zoom (f/2.2) wide-angle with 117 degree. It also has Artificial Intelligence and a macro mode at 3 centimeters.

We also learned that Xiaomi is working on a 5G version of the Mi 9 and is expected to reach the market as Xiaomi Mi 9S 5G. It is said that this smartphone will borrow many of its Mi 9 specifications. But it will feature the latest Snapdragon 855+ processor and a larger 4,000 mAh battery.

For now, we do not know when this new version of the Xiaomi Mi 9 will arrive in Europe or other markets. But we will be attentive to any developments.

Next Vivo NEX new flagship will retain the 3.5 mm jack