According to speculations out of China, Xiaomi will release the Xiaomi Mi MIX 4 next month. According to Wang Teng, Redmi was the first to use the 64Mp sensor so Xiaomi will most likely be the first to use the recently released 108MP sensor. Since the 108MP sensor was launched a few days back, Xiaomi has to use this sensor on an imminent device if it must be the first. This suggests that the upcoming Mi MIX 4 could launch with the 108MP sensor. Another imminent Xiaomi device is the Xiaomi Mi 9S. However, this is just a 5G version of the Mi 9. Thus it would most likely not have any major change from the Mi 9.

As usual, Xiaomi will use the best hardware and top-notch innovation on the Mix-series latest flagship. The Mi MIX 4 should come with the Snapdragon 855+ SoC. According to speculations, this device will also sport an on-screen camera as well as a 100W fast charge. 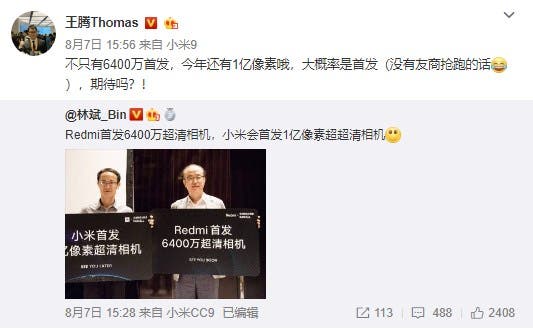 A series of new smartphones such as vivo NEX 3, iQOO Pro 5G, etc., will hit the market between August and September. Therefore, Xiaomi will not take too long to release the Mi MIX 4 so as to keep up with the competition. However, at present, there is no official information on the Xiaomi MIX 4 thus its best to take the current rumors and speculations with a grain of salt.

Previous 5G smartphone shipments will exceed 200 million by next year