Samsung is deploying a new update for the Galaxy A50 which includes an improved battery charging algorithm as well as big refreshment for fingerprint reader performance. The usual pack of stability tweaks and performance enhancements are also present in the package.

The new update bears the A505FDDU2ASH3 serial and weighs in at 320MB. Worth noting that along with the battery charging improvements, the update also brings the August security patch. The changelog mentions that “the security of your device has been improved” we can’t say if that is just a description for the new security patch, or if Samsung is really bringing security enhancements with this update. 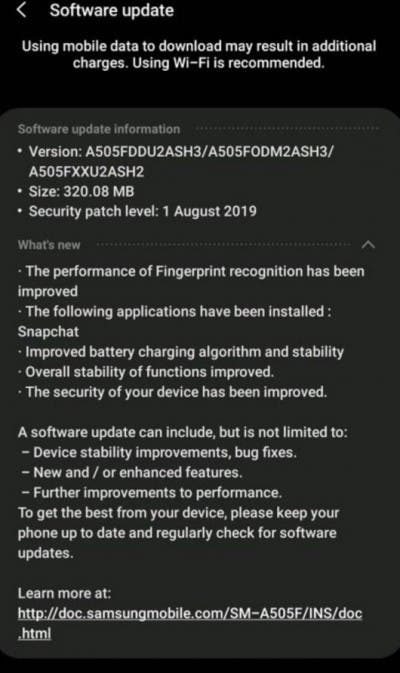 What is curious with this update is that it is pre-installing Snapchat. The same happened with the Galaxy A70 that got a ton of third-party apps via an update. We don’t need to say how users reacted to this. Thankfully, all these apps could be uninstalled, but we still need to wait and see if this is also the case with the Galaxy A50 update.

The update is currently rolling out in the most important market for the Galaxy A-series – India. Of course, it should spread to more countries where the handset is available in the coming days. Since it is rolling out via OTA, it may take several days to reach all the units. If you’re an impatient user, you can try to force check the update via the Settings >> Software Update menu.

Next OnePlus TV will be announced in September; Coming to the Indian market first