In recent times there have been reports of a new Meizu trademark “MEIZU UR”. According to speculations, this trademark is for a new high-end brand product line of Meizu. Others believe that it is a modular custom mobile phone. Today, Hua Hailiang, Meizu’s VP cleared the air on what this trademark represents. 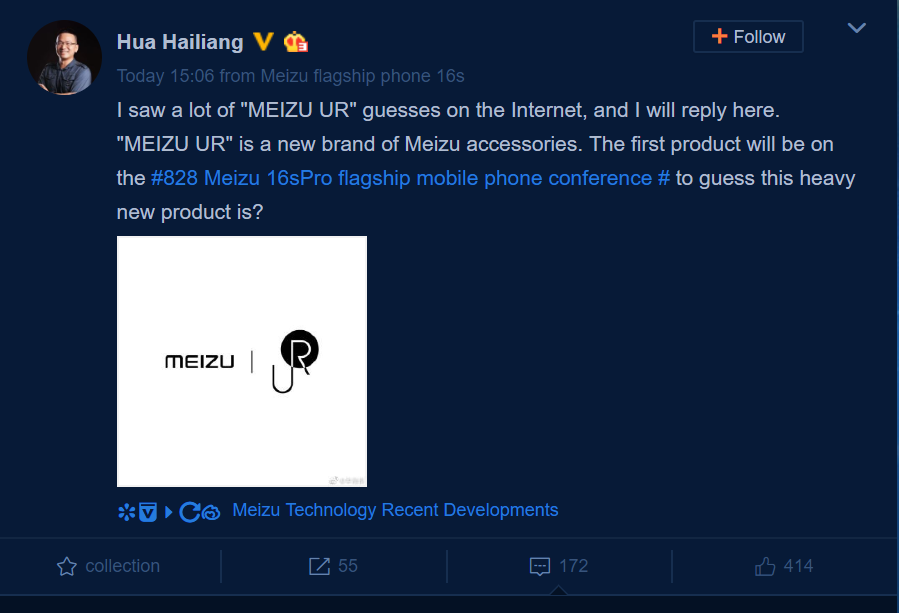 He said in a Weibo post, “I have seen a lot of “MEIZU UR ” guesses on the net, and I will reply here in a unified way. “MEIZU UR ” is a new brand of Meizu accessories. The first product will be on the #828 Meizu 16s Pro flagship mobile phone conference#…”

The company recently sent out invitation letters for the launch of the Meizu 16s Pro. The invitation letter shows that Meizu will hold a new product launch conference at the Meizu Base Camp – Zhuhai Grand Theatre at 14:30 on August 28.

According to the reports so far, the Meizu 16s Pro will not be much different from the Meizu 16s in terms of design. Speculations also have it that this device will use a 6.4-inch display with a resolution of 2232 × 1080. Under the hood, we will have a Snapdragon 855+ SoC as well as 6GB of RAM and 128GB of internal storage. As for the camera, we have a 20MP selfie shooter and a 48MP main rear camera. The rear uses a multiple-camera setup. Meizu 16s Pro will come with UFS 3.0 flash memory. This is the first Meizu flagship to use the UFS 3.0 flash memory.