Smartphones maker Redmi has announced that it will launch its next smartphone and the successor to the Redmi Note 7 on August 29 in China. We are talking about the much talked about Redmi Note 8.

The Redmi Note 8 / Redmi Note8 Pro as we reported earlier will launch alongside the Redmi TV, although we are not sure what time the event will kick-off. And as previously rumored, the RN8  series will come fitted with a Quad-camera setup. And while some OEMs are opting for a circular arrangement, Redmi will adopt an L-shaped format for the Note 8’s camera array. The launch event poster confirms it has three vertical cameras with a LED flash and ToF sensor affixed to it’s right. 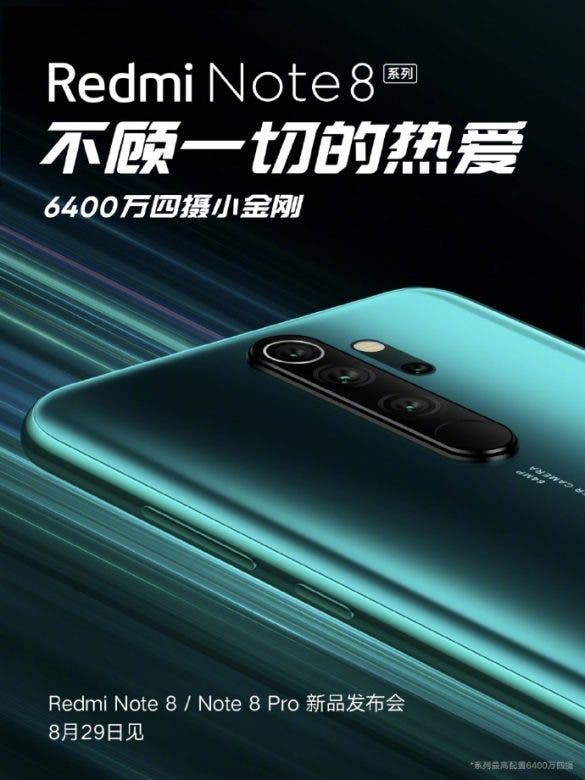 Furthermore, the poster also confirms the presence of a capacitive rear fingerprint scanner – at least for the standard Redmi Note 8. There is the likelihood that the Pro variant might get an in-display fingerprint sensor, that we shall find out in the coming days. Still, on the camera, Redmi through the launch poster has also put to rest speculations that the device will bring more camera pixels.

Indeed, the Redmi Note8 will come fitted with a 64MP Samsung ISOCELL GW1 sensor as the main shooter. Other camera details are still under covers.

While we won’t be getting the full specs and feature details until the deal date, a recently leaked promo video suggests the Redmi Note 8 series might be getting one of the feature hitherto exclusive to the Mi series. Yes, the Redmi Note8 as revealed in a leaked video yesterday might come with NFC. While QR codes are still prevalent in China, the NFC is becoming widespread, so it makes sense extending it to the budget devices from Redmi.

Aside from the RedmiNote 8 and Note 8 Pro, Redmi is also apparently working on the Redmi 8 series. The device has been in the news for quite some days now. The brand has yet to confirm its existence, so we are not sure how soon it will arrive. For now, all we know is that the Redmi Note8 and the Redmi TV will go official on August 29th.

Previous OnePlus TV will be announced in September; Coming to the Indian market first

Next Huawei Nova 5T to go official on August 25 with 6.26-inch display