It is no more news that Xiaomi sub-brand Redmi doesn’t only make smartphones, the company also make other devices including Personal computer, Washing machine, and a lot of others. The brand which has made significant progress since it was first carved out as an independent Redmi brand is soon entering into the TV market. We now have a launch date for its first TV – the Redmi TV.

The Redmi TV arrives on August 29 as announced by its general manager Lu Weibing officially on Weibo earlier this morning. We are not really awestruck with the announcement, given that the General Manager of Xiaomi’s TV segment, Li Xiaoshuang had earlier hinted that the TV will be arriving soon. 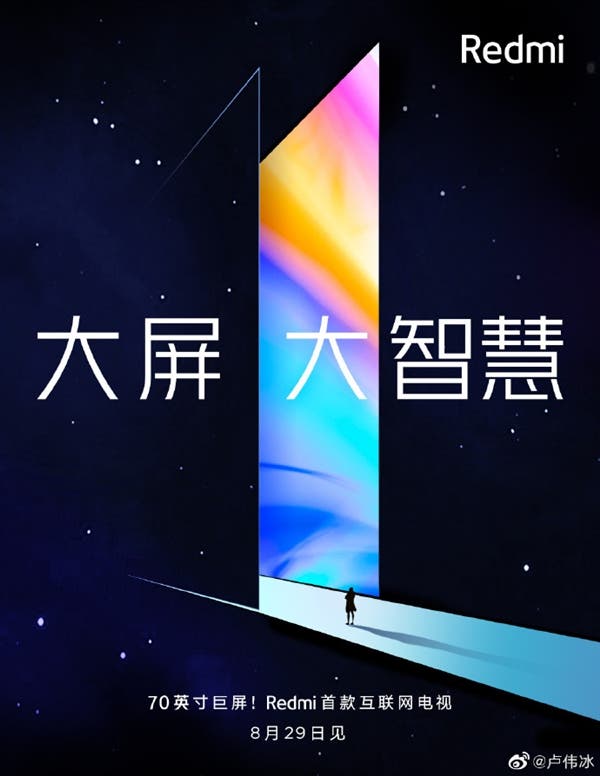 We do not have details of the RedmiTV, though the firm confirmed that its first  TV will bear a large 70″ screen, while there are indications it will be a 4K TV with HDR support, Patchwall UI, Dolby + DTS audio and support for Bluetooth Voice Remote.

Xiaomi currently sells a host of TV in the Chinese market where it is currently the market leader. So it looks set to consolidating that position with the arrival of the RedmiTV since Redmi’s products are all about value. However, the Redmi TV will meet stiff competition in the market, especially with the recently announced Honor Vision TV, from Huawei sub-brand Honor, and not forgetting the Oneplus TV which will be hitting the market soon.

Previous Lu Weibing confirms some specs of the Redmi Note 8