It’s looking increasingly likely that a new Redmi Note 8 is imminent, arriving within the next few days. Xiaomi Redmi sub-brand earlier today confirmed that it has a launch event for August 29 in China. No, the event isn’t a smartphone affair, instead, the brand will be revealing the much anticipated Redmi TV -the first from the Xiaomi backed brand.

But it appears the Redmi TV isn’t the only exciting product set to debut on the said date. The Redmi Note 8 might be making its debut at the event too. While the brand has yet to officially proclaim that, Xiaomi’s CEO, Lei Jun appears to have unwittingly confirmed same while reacting to a comment made by a fan in the Redmi TV post on his Weibo page.

Asked if the RedmiNote 8  launch alongside the Redmi TV on August 29, the CEO simply replied with a thumbs-up emoji. This is no doubt a clear indication that the Redmi Note 8 will launch on August 29, though we might have to wait for an official announcement to be clear on this. 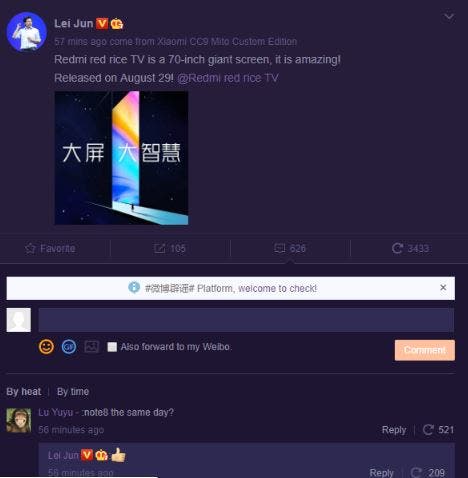 Exact specs details of the Redmi Note 8 are still under the wraps, however, we do know that it could launch with quad-rear camera setup. Xiaomi VP and general manager of the Redmi brand, Lu Weibing also recently hinted that the device will come with a better battery and great at taking photos.

Previous Redmi TV to be announced on August 29