Redmi is all over the news because the company is getting set to release some new smartphones. Today, Xiaomi VP and general manager of the Redmi brand, Lu Weibing, took to Weibo today to share some details about the Redmi Note 8. According to him, the Redmi Note 8 comes with a better battery and takes better images. In addition, he said that this device comes with better feel as well as a higher screen ratio. In the comment section of the post, Lu Weibing also gave a reply which says that this smartphone charging capacity is higher than 10W. 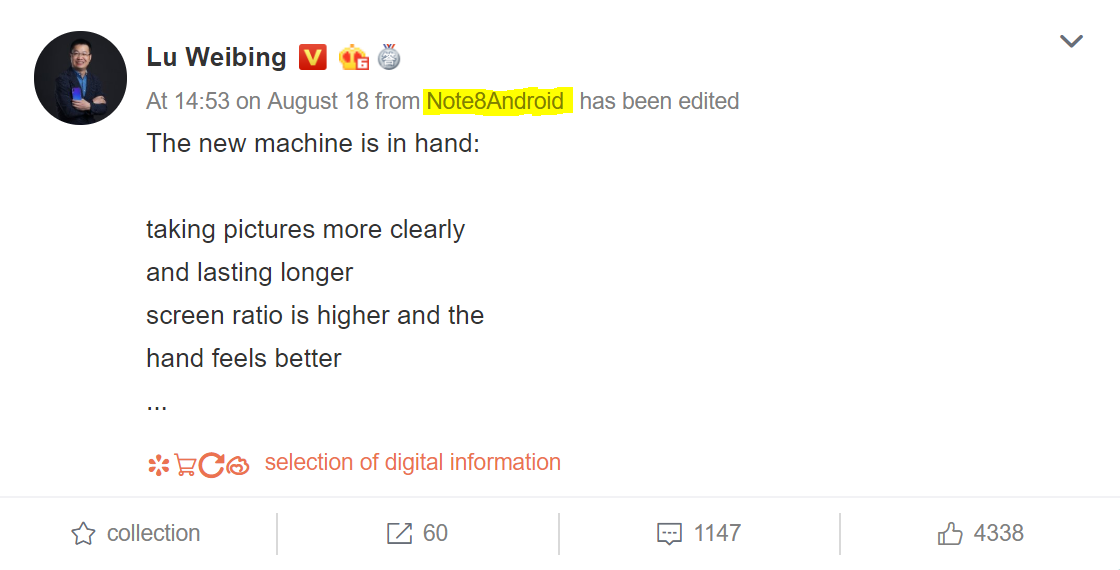 He is most-likely comparing this smartphone to the Redmi Note 7. The Redmi Note 7 uses a 48MP main sensor and the Note 8 upgrades to a 64MP shooter. Furthermore, Redmi Note 8 will use more than the 4000 mAh battery which comes with the Note 7. It appears that Lu Weibing is now using the Redmi Note 8. His Weibo posts now read “from Note8Android” which means that he uses the Redmi Note8.

According to Lu Weibing, the smartphone with quad-rear camera setup will use Samsung’s new 64MP camera. From earlier reports, Redmi’s smartphone with the 64MP will also come with a waterdrop display. However, it will have the new MediaTek Helio G90T processor under its hood. Lu Weibing, vice president of Xiaomi Group and general manager of Redmi brand, revealed that the 64MP smartphone from Redmi went into mass-production half a month ago. He also assured everyone that there will be enough stocking of this smartphone.

Redmi will also likely announce the Redmi 8 or Redmi 8A alongside it. This smartphone with model number M1908C3IC recently appeared on TENAA. A real image of this device recently hit the web. The Redmi 8 (or 8A) will come with a Snapdragon 439 SoC coupled with 4GB of RAM and 64GB of expandable storage. It also comes with dual rear camera setup, 5000 mAh battery, and a rear fingerprint sensor.

Next Redmi TV to be announced on August 29