Today, Xiaomi’s VP and general manager of the Redmi brand, Lu Weibing released a factory assembly video of Redmi’s 64MP quad-rear camera phone. According to him, this smartphone went into mass production two weeks ago. He further stated that the stocking of this device will satisfy everyone.

From the available screenshots, we can see that the cameras are in the middle of the device. Three sensors have a vertical alignment while the fourth sensor lies astride them to the right. This smartphone will not use a pop-up camera setup thus it will likely come with a waterdrop design. Apart from the stocking, Lu Weibing did not say anything else regarding this smartphone. 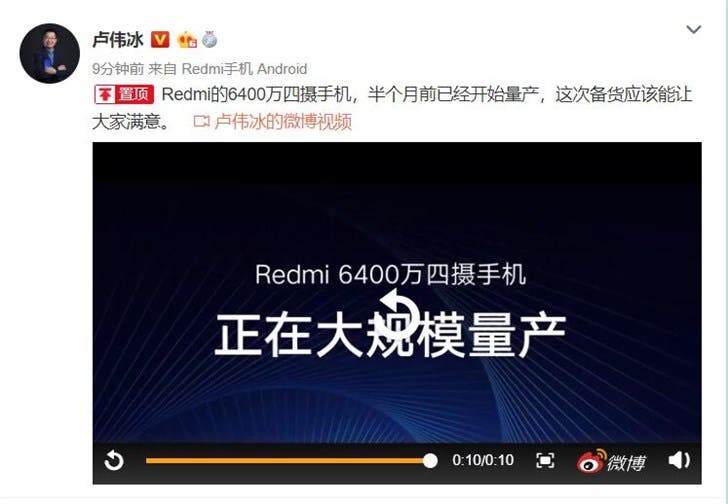 Xiaomi recently held the Xiaomi Future Image Technology Communication conference in Beijing. At the conference, the company gave details about the upcoming 64MP camera which happens to be a Samsung sensor. The global vice president of Samsung Electronics’ LSI Division, Li Jishuo then gave salient details about this sensor. According to him, the GW1 uses a 1/1.7-inch ultra-large bottom sensor (1.6μm large pixel size). This is 34% larger than their previous generation and it supports 4-in-1 pixel-binning technology. With its pixel-isolated ISOCELL PLUS technology, the Samsung GW1 sensor guarantees high color reproduction. This also improves its sensitivity by 15%. Furthermore, the Samsung GW1 comes with hybrid 3D HDR support. The hardware-enabled HDR ensures a better and wider range for images. The conference concentrated on the 64MP camera. Nothing was said about the upcoming Redmi or Xiaomi device to use this sensor.

Next Realme 5 price for India confirmed by the company's CEO