Motorola today has launched yet another budget smartphone dubbed Motorola One Action in the Indian market. The One Action is the fourth smartphone to join the Moto One family which already includes original Motorola One, Motorola One Vision and Motorola One Power. As the name suggests, Motorola One Action focusses more on videography and can capture action shots from a dedicated sensor. One of the key feature devices includes the ability to record horizontal videos without tilting your phone at all. This means that you can record horizontal videos while keeping your phone in a vertical position. The smartphone maker was able to achieve this with the help of the ultrawide angle lens. 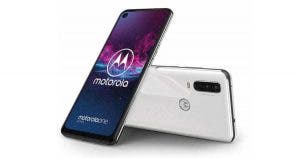 The Motorola One Action comes in a single storage option featuring a 4GB of RAM and 128GB of internal memory. Speaking of colours, the device is going to come in two different options namely Denim Blue and Pearl White. The smartphone will be available for purchase via Flipkart from 30 August. For the Indian market, Moto One Action is priced at INR 13,999 (roughly USD 195).

Motorola One Action: Key Specs at a glance

Coming to the specifications, Motorola One Action features a 6.3-inch IPS LCD display having a resolution of 1080×2520 pixels and ultrawide 21:9 aspect ratio. The brand is calling it the CinemaVision display. Under the hood, the smartphone is powered by an octa-core Exynos 9609 chipset coupled with Mali G72 MP3 GPU. You can find the same chipset on the previously launched Moto One Vision. In terms of storage, the device packs 4GB of RAM and 128GB onboard memory. If that’s not enough, you can make use of MicroSD slot thanks to the hybrid slot.

For imaging, the device is equipped with a triple camera module at the back. It consists of a primary 12MP sensor (f/1.8 aperture), 5MP depth sensor and lastly the 16MP ultrawide angle lens. The smartphone maker is touting the 16MP sensor as the industry’s first ultra-wide action lens. The smartphone can record up to 4K videos at 30fps using the primary sensor and 117 degrees 1080p videos using the action lens. For the video stability, the device is packed with EIS resulting in less shaky recordings. For selfies, there is a single 12MP punch-hole front snapper located at the corner of the display.

As expected, Motorola One Action runs on the Android One platform having the latest Android Pie operating system. As per the company’s claims, the device will get the future Android Q and Android R updates. All of this is backed by a 3,500mAh battery packed inside with a 10w charging support. Other features include USB Type-C, 4G VoLTE, Bluetooth 5.0, NFC, dual-band WiFi and a 3.5-mm headphone jack. Additionally, the smartphone supports Dolby enhancements and comes with IPX2 water resistance rating. For biometrics, the device has a fingerprint sensor at the back underneath the Moto logo.