The upcoming Motorola One Zoom has surfaced yet again in three new colors. The Motorola One Zoom is just a different variant of the Motorola One Pro, which is an Android One phone. Unlike the One Pro which ships with vanilla content, the One Zoom comes with some specific Amazon content. Since both devices are the same, we’ll see the same color options for both variants.

Both versions of the handset will be revealed at IFA early next month. Worth noting that these variants won’t compete in the same markets. We’ll probably see Motorola One Zoom being released in partnership with Amazon in India, other markets will just receive the One Pro. 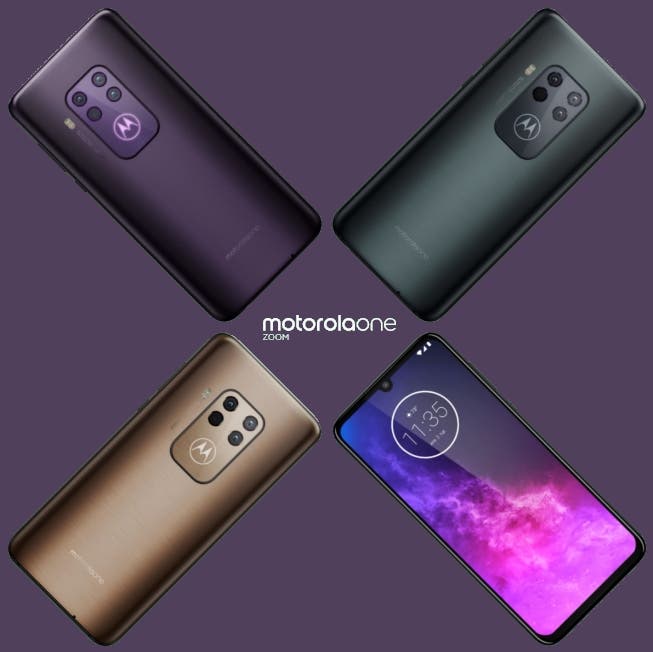 The handset ships with a quad-camera setup on the back comprising a 48MP Quad Bayer sensor and gets its name from the zoom lens. This camera arrangement will offer 3x optical (81mm) and 5x hybrid zoom. There will also be a 13mm ultra-wide-angle camera and a depth sensor. Of course, Motorola will offer its own vision of “Night Mode” via the stock camera app.

Moreover, the Motorola One Zoom will ship with a 6.2-inch 1080p+ Super AMOLED panel with an in-display fingerprint scanner. Therefore, the One Zoom will be a smartphone the sits above the One Action and One Vision. According to a leaked Amazon price, the handset will retail for €400 (~$445). So it’s easy to assume that the vanilla One Pro will be more expensive than the one shipping with Amazon content.

Despite the premium appeal, the handset will come with a Snapdragon 675 that by all effects still is a mid-range SoC. The chipset will be paired with 4GB of RAM and 128GB of Storage. It comes with USB-C port but retains the 3.5mm headphone jack.

Next MediaTek 5G SoC To Become Even More Powerful