Samsung will update its ruggedized line of tablets soon. The last evidence surfaced when an alleged Galaxy Tab Active Pro 10.1 acquired FCC and Wi-Fi certification in a row.

According to the FCC listing,  the device will come bearing the SM-T545 and SM-T547 model numbers. The first stands for the Wi-Fi variant, while the second is for the LTE version. According to the Wi-Fi Alliance documents, the new rugged tablet will ship with Android 9 Pie straight out the box. Since it’s a Samsung device, we’ll have the usual OneUI built-in the software.

Interesting enough, the same SM-T545 appeared in a previous GeekBench report. According to the listing, the device will boast the Snapdragon 710 chipset which will come alongside 4GB of RAM. We already know how satisfactory the Snapdragon 710 performance can be. The device apparently won’t be an exception since it scored 1618 points on the single-core tests and 5641 in the multi-core performance. 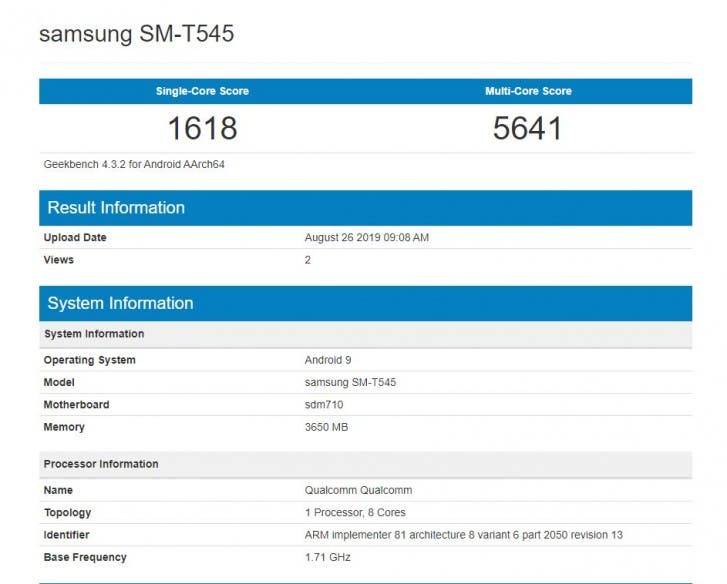 The Galaxy Tab Pro 10.1 shouldn’t be much different from what we’re used in the rugged line of Active tablets. We expect the upcoming tablet to offer a hard plastic build with solid protection on all corners alongside an official IP rating and S-Pen support.

While Samsung is still quiet about the release of this tablet, we don’t think it will take much time. In the end, we won’t be surprised to see it as soon as next month during IFA 2019.