In line with previous rumors and leaks, the third generation of the VIVO NEX series is launching later this month, though not toward month-end as previously peddled. The Chinese smartphone brand earlier today via a teaser that the VIVO NEX 3 will debut on September 16 – just a few days before the Mate 30 from Huawei is unveiled.

Just as we had known it was launching this month, we had already heard much about the device, with some still left unconfirmed. Earlier this week, the device showed up on the popular TENAA SITE for certification in China essentially confirming every detail. 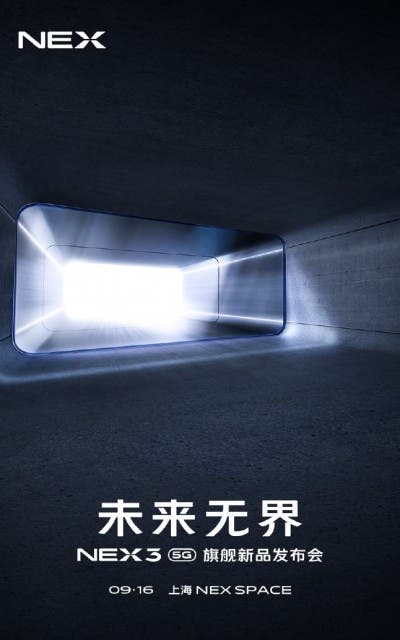 The specs detail as seen on TENAA puts the device on the flagship-grade level, though we expect it to launch at a competitively low price. The listing on TENAA reveals the device will come flaunting a 6.89-inch full-HD+ AMOLED display with a screen resolution of 1080×2256 pixels. It has a curved screen or if you like a “Waterfall screen”, and is powered by the latest Snapdragon 855 Plus coupled with 8 /12 GB RAM and up to 512 GB of non-expandable storage.

Similar to the upcoming Huawei Mate 30, the VIVO NEX 3  has a circular camera module housing a triple camera setup. The main shooter is a 64MP sensor alongside a 13 MP + 13 MP combo. And for selfies and video calls, it gets a 16 MMP sensor on an elevating module upfront.

The VIVO NEX launches later this month alongside a 5G variant which has also gone through the pace of TENAA. The variant gets a 4,410 mAh battery with dual-SIM support, GPS, and Bluetooth.

Previous Huawei Watch GT 2 will use a larger battery, built-in speaker and microphone

Next New leaks of the LG foldable mobile with stylus pen