LG has just released the LG G8X ThinQ to serve as an upgraded variant or perhaps a direct replacement to the standard G8 ThinQ. The handset is an incremental upgrade over the former flagship, however, LG is teasing its upgraded Dual-Screen as the icing on the cake of the device. After all, why to bother buying a foldable smartphone when you can use a secondary display just by inserting the phone in a case.

The LG G8X ThinQ boasts a 6.4-inch display which is bigger than the one in the original G8 and matches the LG V50’s panel. The resolution is lower than any of the current model with 2340×1080 pixels. It probably has something to do with the segmentation in LG’s Homeland. According to reports, the G8X will be sold as LG V50S inside South-Korea. The display is an OLED one, and thankfully, this time around there’s a under-glass fingerprint scanner.

The standard 8MP selfie snapper in the original model has been replaced by a 32MP Quad Bayer unit. The ToF sensor is gone for good, for that reason, the G8X ThinQ ships with a small teardrop notch (Finally!). There’s a small drawback though, the Hand ID feature which debuted with the LG G8 is gone. But there is someone who really thinks that it is more than a gimmick? 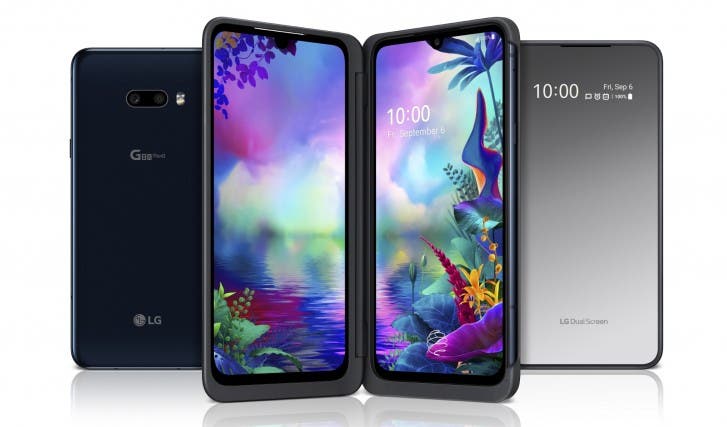 The rear camera department is composed of two cameras in a horizontal setup which sits on the glass rear panel. The setup comprises a 12MP main unit (1/2.55″ sensor, 1.4µm pixel size, f/1.8 aperture, dual pixel PDAF, OIS) which comes along with a 13MP ultra wide-angle module that covers a crazy 136-degree field of view. That’s a feature that will resemble the old LG G5. Interesting enough, LG’s new handset doesn’t include any kind of Telephoto Lens, something that is very uncommon nowadays.

Under the hood, the G8X features a Snapdragon 855 (not the upgraded 855+) paired with 6GB of RAM and 128GB of Internal Storage. If that is not enough for you, there’s a microSD slot. LG still believes in the 3.5mm headphone jack, and the G8X won’t be an exception. The analog port comes with all the QuadDAC enhancements. The handset ships with Android 9 Pie with LG UX 9.0 running atop. Last but not least there is a 4,000mAh battery fueling the house. 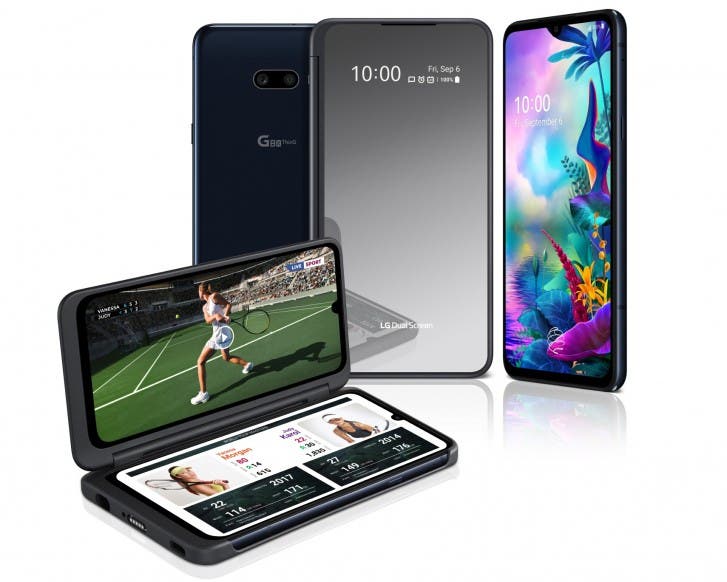 Alongside the G8X, LG has just revealed the DualScreen accessory. This accessory basically is a flip-case that comes with another 6.4-inch display that it’s exactly like the one in the handset. There’s even a secondary monochrome 2.1-inch OLED display in the external part. With this accessory, the LG G8X wins two additional displays, something that makes it the only device in the market with three displays.

The Dual-Display advantages include displaying two apps side by side, having a big and easy-to-type-on keyboard on one, or for a gamepad. The best feature is, of course, the fact that you won’t need to use it always. You can just equip the secondary screen in the handset whenever you need it. But if you know you won’t use it, you can simply leave it at home. That’s an advantage that foldable smartphone owners won’t have. 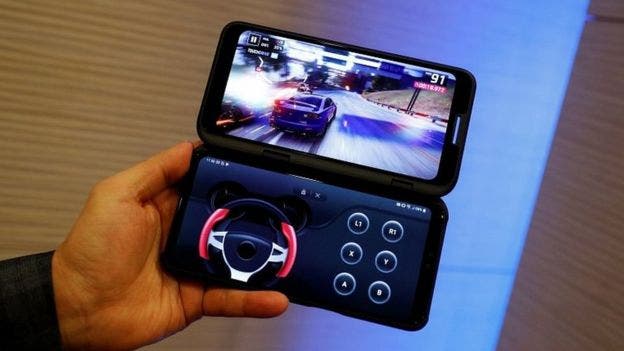 The accessory doesn’t include a separate battery. It will be feed by plugging into the G8X’ USB-C port, leaving a set of pogo pins for charging with an included adapter or wireless charging as the next best option. The secondary display case alone weighs 134g, combined with the phone (192g) it goes up to 326g. This little dream of the double-edged smartphone won’t be the most lightweight experience.

Perhaps this particular product won’t be everyone’s cup of tea, but it still is an interesting new approach. We are curious to see how the G8X will perform along with this accessory. Other details as pricing and availability are yet to be revealed by LG.