Samsung is already working on several S-upgrades for its M and A lineups. Some of them were already released, but there are still several devices coming until the end of this year. By 2020 we may see a huge increase in the company’s portfolio of midrange devices. Despite the growing numbers, Samsung is still firmly delivering an update for the handsets that are already available in the market. Today, a new build is rolling out for the Galaxy A50.

The new update is coming over the air and enhances the performance of the touchscreen. Interesting enough, it further improves the moisture detection algorithm. Samsung introduced this latter feature a long time ago. It works by monitoring the USB port to avoid surprises when users are attempting to charge the phone. If the sensor detects moisture inside the port, it automatically disables charging. 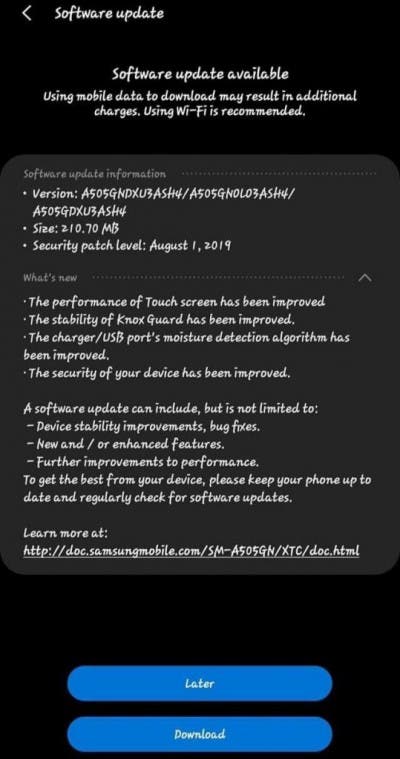 Along with the aforementioned upgrades, the company is also enhancing the performance of Knox Guard. Furthermore, the update brings August Security Patch to the handset. Although we’re already in September, just a few select devices have it. So it’s better having August patch than nothing. Last but not least, the update also comes to address some bugs, although the changelog fails to specify them.

The new Galaxy A50 firmware bears A505GNDXU3ASH4 serial number. According to some users in Philippines, the update is already rolling out there. Other regions should receive the update in the coming days. If you’re an impatient user, you can always try to check on Settings >> Software Update to see if the update is already available for your device.

Next Realme 5 will go on sale every Tuesday starting tomorrow