Much about the Redmi 8A has been said on the rumour mill last month. However, the handset has started appearing on official certification portals. In today’s news, the upcoming affordable Redmi 8A handset has appeared on The National Broadcasting and Telecommunications Commission (NBTC) with the model number confirming its name. The model number is M1908C3KG. Another model – M1908C3IG has also stopped by the same website and it is believed that this model is the Redmi 8.

Thanks to our several encounters in the past, we know that the Redmi 8A has a tear-drop notch design and a dual-rear camera along with a visible fingerprint reader. A recent model M1908C3IC appeared on China’s TENAA which has the exact same design as the leaked images and hence the TENAA listing is attributed to the Redmi 8A. If that’s any indication, the affordable phone will have a 6.2-inch HD+ display, Android Pie-based MIUI 9.7.11 software. The processor, which is another strong hint towards the phone’s identity, is the Snapdragon 439 (spotted on leaked images) was listed with 4GB RAM and 64GB. There is likely a massive 5,000mAh battery on this device which makes it the biggest on an entry-level Redmi phone ever. The couple of certifications suggest that the launch of the device is approaching fast. The only thing left is an official launch date. 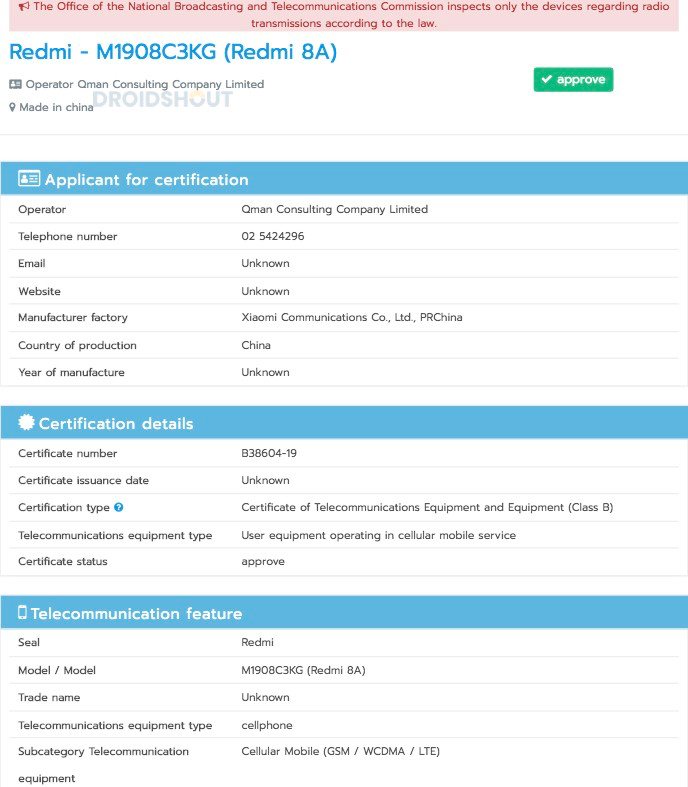