A few hours ago, Chinese manufacturer, Realme, announced the Realme XT in India. The main features of this smartphone is its 64MP main camera and the Qualcomm Snapdragon 712 SoC. However, it appears that the company is already preparing an upgrade to this device. According to a recent poster from Realme, there will be more surprises in December. This shows that a higher version of this smartphone will arrive at the end of the year. 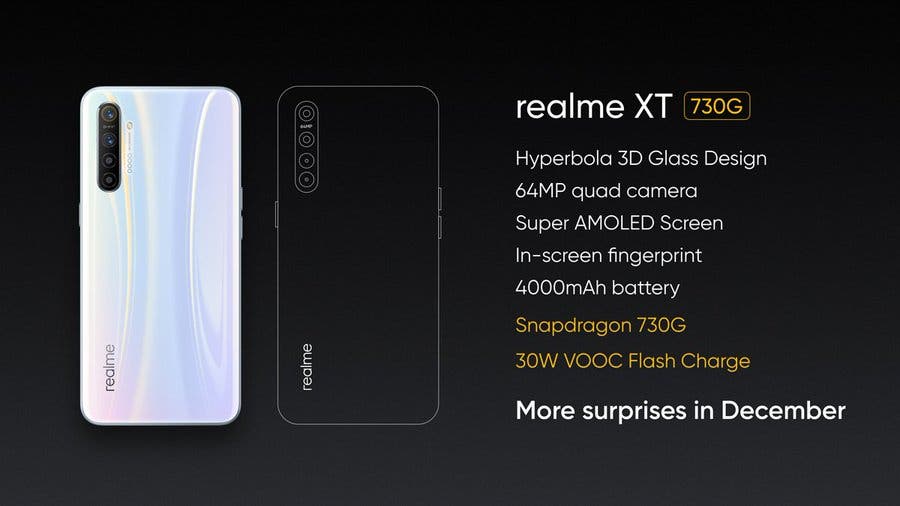 This upgrade seems to be like a hardware improvement and nothing else. According to the poster, this device will come with a Qualcomm Snapdragon 730 SoC. This chip has a better performance than the SD712 in the recently released version. In addition, its GPU has higher clock speeds. Furthermore, this smartphone will also boast of an advanced 30W VOOC Flash Charge. These are about the changes that we expect from the Realme XT high version.

We are not done yet! We have more surprises coming up for you this December!
Stay tuned for realme XT 730G! pic.twitter.com/HGyJ5GQwcF

The likes of the battery capacity, camera, design, and other features remain the same as the recently released version. Obviously, this is not much of a surprise at this time, however, we will have to keep our fingers crossed to see what surprises (if any) this smartphone has to offer.

Next Realme XT with 64MP Quad camera launched in India, starts at $250