Samsung has been announcing changes in its Galaxy A and Galaxy M series for a few weeks. The company is renewing several of the most popular devices in the first half of the year. We have already seen how the Galaxy A50s has been presented with interesting changes in the camera and now it is the turn of a slightly more modest model. This is the Samsung Galaxy A20s, the renewal of the Galaxy A20 presented at the beginning of the year. This device is not yet official, but it has been leaked with many details. The newly published image is not only showing the design, but also an almost complete list of features.

If you are looking for a mid-range mobile and you are not a fan of brands such as Xiaomi or Realme, Samsung has significantly improved its mid-range devices with the A and M series. Smartphones such as the Galaxy A50 or A40 have been the best sellers in several markets so far this year, even ahead of Xiaomi or Huawei.

The new Galaxy A20s will arrive soon with these improvements 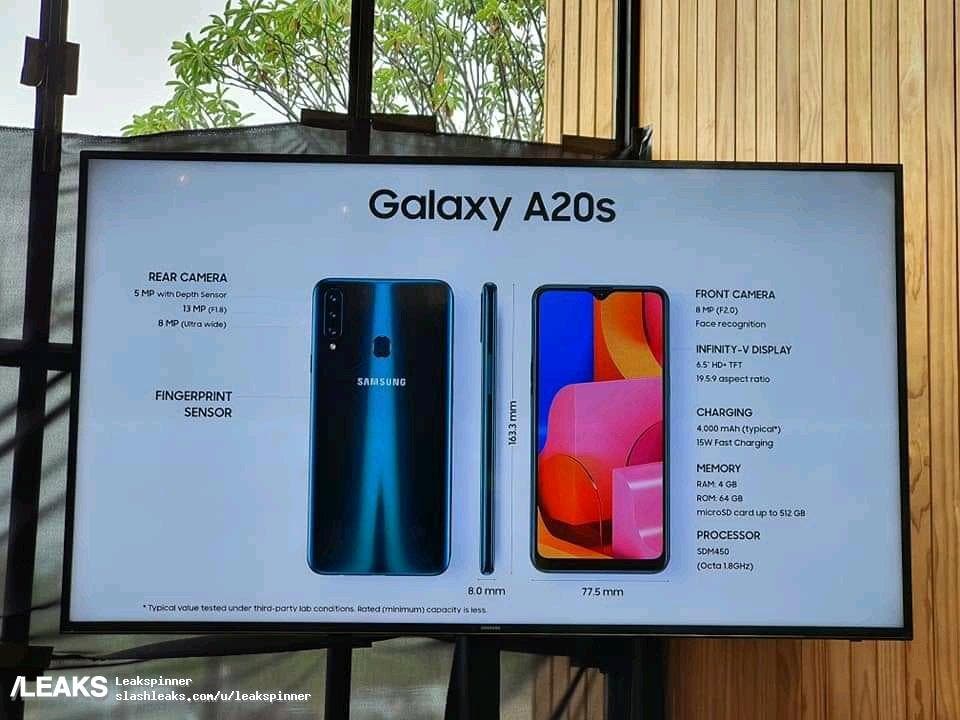 The Galaxy A20 is currently sold in a large number of markets around the world. It is an economical device that will receive a renewal after several months. On the design side, we will see important changes, especially in the size of the terminal. While the current Galaxy A20 has a 6.4-inch screen, the new A20s will arrive with 6.5 inches. The bad news is found in the resolution, as this does not increase and stays in the HD+.

One of the most outstanding features is its camera. Now it comes with a triple sensor that houses a 13MP main shooter, a secondary 8MP wide-angle and a third 5MP sensor to measure depth and help in portrait mode.

The phone comes with an increase in the amount of RAM and base storage, so Samsung begins to set aside 32 GB of internal storage. The device has a very generous 4,000 mAh battery and a fast charge that reaches 15W.

We know all these details thanks to the leaked image. This is a photograph taken from some kind of internal presentation, because Samsung has not yet announced the arrival of the device officially.

Next Apple Arcade is already available, several days before its official launch