Realme is gearing up to reveal a new premium midrange contender in the form of Realme X2. The handset acts as a proper sequel to the recently released Realme X bringing upgraded SoC and some incremental changes. The Oppo’s subsidiary will unveil the smartphone on September 24 but seems confident enough to publish some new details about it before the official unveiling.

According to a new post from Weibo, the Realme X2 will feature a Super AMOLED display with a 91.9% screen-to-body ratio. In addition, there will be a fingerprint scanner placed underneath. Unfortunately, Realme didn’t reveal the actual size of the display. Instead of this, it is teasing with the fact that this fingerprint scanner can recognize a finger and unlock the display in just 0.36 seconds. 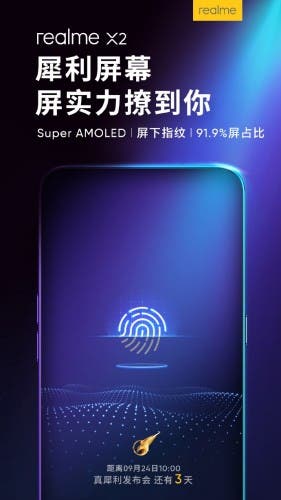 Realme X2 will run on the Qualcomm Snapdragon 730G chipset platform. The SD 730G chipset is based on the 8nm manufacturing processor and comes with eight Kryo 470 cores. For graphics, the chipset makes use of Adreno 618 GPU. Moreover, the handset will ship with a 4,000mAh battery that will charge fast via 30W VOOC Flash Charge system. Other details include a 32MP selfie snapper and a Quad-camera setup on the back that will be lead by a 64MP shooter.

As previously stated, the handset will go official next Tuesday, September 24. So let’s stay tuned to see if Realme will disclose more details before the release.