After launching Galaxy M10s, M30s and A50s, Samsung has now announced another S-variant smartphone dubbed Galaxy A20s. The smartphone has already been in the news for a good amount of time. Well, the device has now been made official putting an end to almost all the rumors circling around the device.  The smartphone maker has posted an infographic of the device revealing all the specifications and features at once. Here is everything you need to know about the Samsung Galaxy A20s. 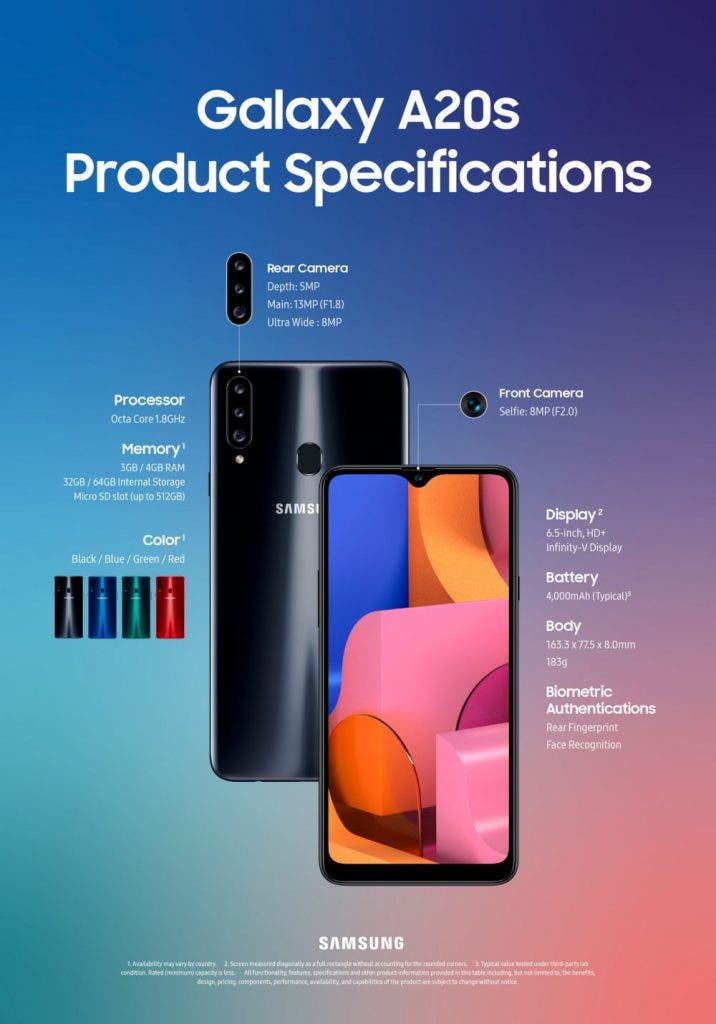 The Galaxy A20s touts a 6.5-inch HD+ display with a V-shaped notch on the top with thin bezels on the side but relatively larger chin at the bottom. For some reasons, Samsung went with the LCD panel instead of the AMOLED one which we saw earlier in the Galaxy A20. Under the hood, the device is powered by a 1.8GHz octa-core processor paired with up to 4GB of RAM and up to 64GB storage. Sadly, the infographics don’t talk about the exact name of the chipset used. The internal memory is expandable via Micro SD to up to 512GB.

For imaging, the smartphone comes with a triple camera module at the back. It consists of a 13MP primary sensor, 8MP ultra-wide lens, and 5MP depth sensor. For selfies, there is an 8MP front snapper with an aperture of f/2.0. All of these is fueled by a 4,000mAh battery packed inside with the support of 15W fast charging. For biometrics, the device comes with a physical fingerprint sensor and also supports Face Recognition using selfie camera.

Samsung Galaxy A20s comes in two storage variant – 3GB+32GB and 4GB+64GB options. The device is also available in four different colors namely Black, Blue, Green, and Red. Unfortunately, the smartphone maker hasn’t revealed the pricing as well as the availability information of the device as of now. We might see more information from the brand soon including the chipset, pricing, and availability.

Next Nubia Z20 heading to Global markets on October 14