The reputed market research company Counterpoint released a new report which details the five most preferred earphone brands in the US market. Apple is the absolute leader, but that’s not a surprise. The US-based company’s slice surpassed Bose, Samsung, Sony, and its own Beats. 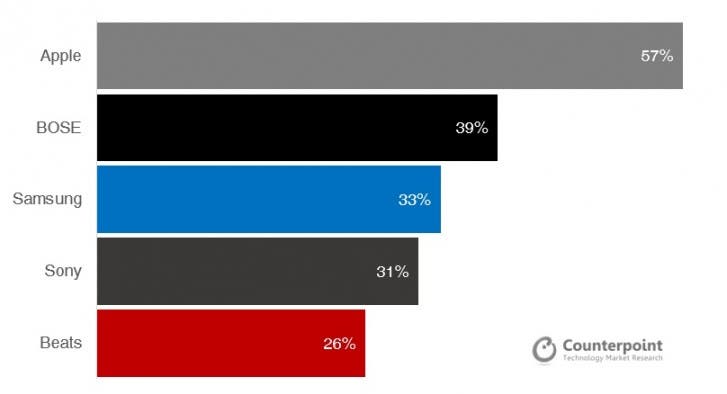 Counterpoint published a chart which reveals Apple’s absolute customer’s preference with a 57% market share. BOSE caught the second spot with 39% of the market slice. In the third place, we have the South-Korean king of smartphones – Samsung – with 33% of the share. In the fourth place, we have Sony with its 31%, followed by Beats with 26% of market share. Worth noting, that Beats is a company owned by Apple. So, in the end, we can consider that all the positive results will also reflect on Apple’s revenue.

According to the author, the main advantages of the AirPods for consumers are their ease of use, portability, and comfort. Worth noting that Counterpoint’s Consumer Lens survey takes into account results from just 200 respondents. For that reason, it’s reasonable to believe that the overall results can have a slightly higher margin of error.

Apple high investment in both the hearable and wearable segment is starting to become a major source of revenue. According to reports, the profitability from both segments will soon surpass combined revenues from the Mac and iPad lines. As a whole true wireless hearables managed to top 27 million units globally in Q2 2019. The US, Europe and China are the leading markets.