Just days ago, Oppo revealed that it will be releasing the Oppo K5 as a side-kick to the Oppo Reno Ace in China on October 10th. The brand has also been actively teasing the upcoming mid-range device on Weibo. And has since revealed a couple of things about the device including the SoC, Battery, and more.

With about two weeks before its final reveal, the OPPO K5 with PCNM00 model number has been spotted on Geekbench benchmarking site confirming a few of its key specs.

The OPPO K5 as listed on Geekbench will come with a Qualcomm Snapdragon 730G chipset running under its hood. Aside from the chipset, the Geekbench listing also tells us the K5 will get 8GB of RAM. And on the software front, it will boot Android 9 Pie out of the box. As for Benchmark performance, the OPPO K5 achieved 1,506 points and 5,837 points in the single and multi-core tests respectively.

Official teasers for the Oppo K5 reveals it will come in Green, Blue and White colors with 3D Glass back.  Also confirmed is a Quad-camera setup including a 64MP main sensor and an 8-megapixel ultrawide lens. The poster further reveals that the phone will offer photography features like black and white, retro and portrait. 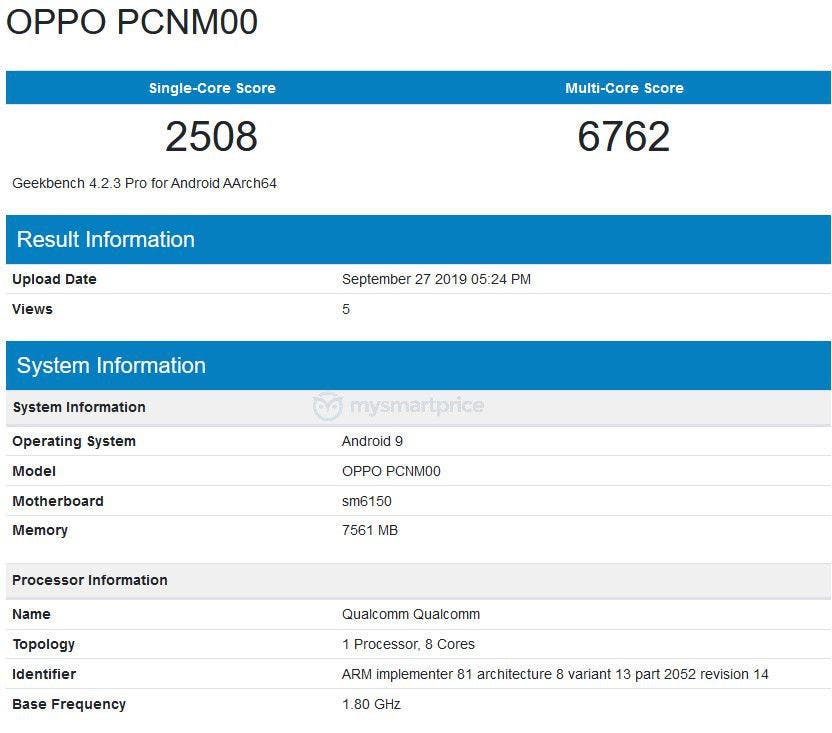 Besides the Quad camera setup, previous teasers confirm the K5 will highlight a 4000mAh battery complete with With the VOOC 4.0. The charging technology should get the charging time down by up to 40%. To be clear, you will be able to jack up the battery to  67 percent from 0% in just 30 minutes.

Previous Oneplus 7T to get super slow-mo recording at 960fps via a software update.