DxOMark is a well-known and respected organization that tests the image quality of smartphones. Earlier this year, the organization introduced DxOMark selfie, which tests the performance of the front camera. Now, the company has officially announced DxOMark Audio test protocol.

According to DxOMark, the size/quality of the screen and features/functions of the camera has been the main considerations for users. However, in recent years, the audio quality is becoming more significant. However, DxOMark only tests the playback performance of the smartphone’s built-in speakers, not the performance when connected to headphones or external speakers. 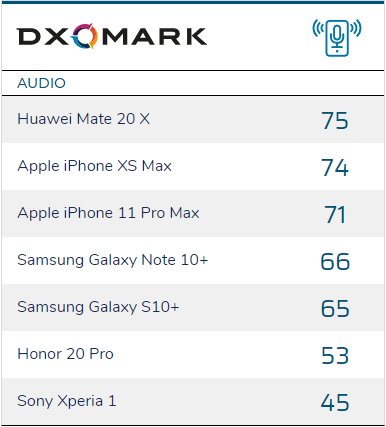 DxOMark subdivides different audio quality attributes into individual items, calculates the scores of each item, combines the scores of the attributes, and then aggregates all attribute scores into an overall score. As the image quality test, DxOMark uses an open scoring system (there is no top score), which means that as the quality of the speakers and microphones increases, so does the score.

According to reports, the DxOMark Audio Lab consists of two main test devices: the muffler room and the audition room. In the anechoic chamber, the audio team places the device under test in a box and seals it, then records the results using a microphone. In addition to the microphone, when you want to test the recording function of the device, it also puts the speaker in the box to simulate various usage scenarios. DxOMark uses several microphones to reproduce a specific scene in the same layout.

In addition, the company also announced the scores of the two sub-items “Playback” and “Recording”. Among the two sub-rankings, Huawei Mate 20X still ranks first. Sony is the only device that has a better recording function than playback.