The official reveal of Google’s next Pixel smartphones  – the Google Pixel 4, and Pixel 4 Xl is happening on Tuesday, October 15th, and it promises to be an exciting one. The spate of leaks in the past month have been on the increase, with the software giant itself even weighing in with some official leaks.

It is still a few days until the official launch, and as if we haven’t had enough leaks and teaser, a Canadian retailer BestBuy has prematurely revealed the entire specs, features, and pre-order details of the entire Pixel 4 lineup.

Pricing hasn’t leaked yet, and not even the listing on Bestbuy has revealed any official number. However, the Pixel 4 BestBuy product page allows you to make a commitment in the form of a $50 deposit for pre-order. This essentially will ensure you have a reserved spot in line and you’ll pick up your phone in-store once stock is available. A 2-year activation or renewal will be required. While the device is set to go official on October 15, we are yet to know when exactly it will be available in-store for pick up at Best Buy.

Away from pricing and availability, the listing reveals the Pixel 4 and Pixel 4 xl entire specs sheet alongside the Pixel 3, and isn’t far away fro all that we have heard so far. However, it highlights 4 major marketing line of both devices, while emphasizing that the Pixel 4  is a phone by Google:

Built around the helpful Google software you know and love, Pixel 4 is a phone made the Google way.

First off, the listing suggests you could take as many incredible photos and 4K videos as you want with your Pixel and save every single one of them in their original quality with Google Photos’ unlimited storage. Unlike Pixel 3, you will be able to save your Pixel 4 photos in Google photos in their original state – uncompressed and at full resolution.

Then again, Google says the  “software in Pixel 4”  helps you take “studio-like photos anywhere” in a point-and-shoot manner. The redesigned Google Camera 7.1 with a cleaner interface is shown off.

There’s nothing new to learn and no editing required. Just point at what you want to capture, and your Pixel will help you get a fantastic shot, every time.

Coming to the much talked about Soli radar-based system, the listing once again confirms the Google Pixel 4 has Quick Gestures, letting you get things done without having to touch your phone. Which is actually pretty great for when you’re cooking or enjoying your favorite tacos.

The listing reveals the Google Pixel 4 has a 5.7-inch Full HD+ with a 90Hz refresh rate, while the Pixel 4 XL gets a larger  6.3-inch Quad HD+ OLED display. Both devices are powered by the Snapdragon 855 with 6GB of RAM and 64GB of internal storage, though there are reports it will come in 128GB variant.

In terms of photography, both devices are largely the same – featuring dual-rear cameras setup comprising of 12MP and 16MP sensors with 4K video capture, while there is an 8MP front-facer for 1080p. Both devices support face unlock, and are fitted with a 2,800 mAh and 3,700 mAh batteries for the Pixel 4 and Google Pixel 4 XL respectively. The listing only confirms a single color option – Black, even though we have seen it leaked in white, and orange color options. 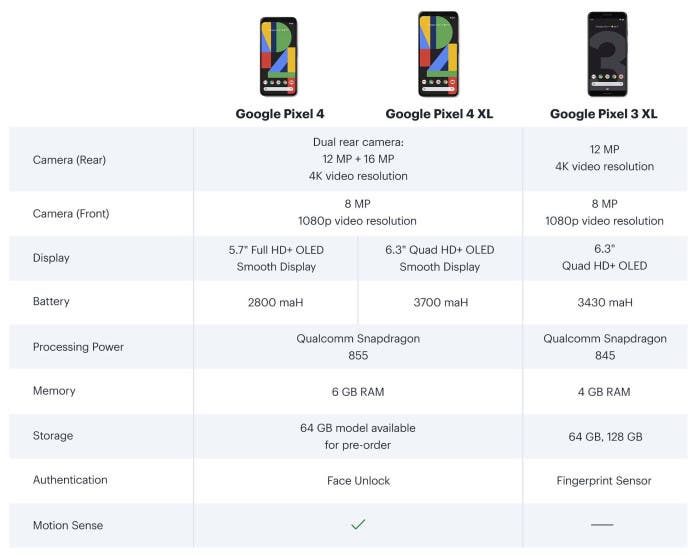 Next iPhone 12 Pro design will be similar to iPhone 4