ZTE earlier this year made its way back to the US smartphone market with the flagship Axon 10 Pro months after it has been out in China and Europe. Now, it appears the Chinese brand is on the verge of releasing a new device as suggested by some recent leaks. The ZTE Blade 20 which appeared alongside the  Blade A5 (2020) on the FCC earlier this month with a design reminiscent of certain recent flagships could be launching in China soon.

The ZTE Blade 20 with the model numbers V1020 has now surfaced on TENAA, complete with specs, and images that lonesup with the ones earlier outed by FCC.

The device has a 6.088-inch display with a 1560 x 720 resolution. And much like what we saw earlier, it gets a water-drop notch which is home to the front camera.

On the reverse side, there is a trio of cameras arranged in a squarish module, and alongside the camera setup is a fingerprint scanner. Speaking of the camera details, the TENAA listing notes that the ZTE Blade 20 gets a 5MP front cam, with a 16MP main camera coupled with an 8MP sensor that is likely an ultrawide camera , while a 2MP sensor for depth capture completes the camera specs. 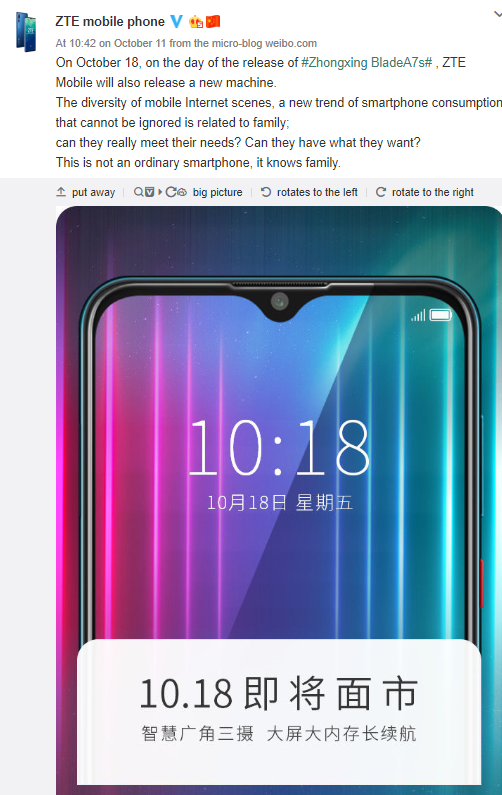 We don’t have the chipset details, however, the listing has it as one with a 2.0GHz octa-core processor paired with 4GB of RAM and 64GB of storage with a microSD slot letting you add more storage up to 512GB.

With a footprint of 155 x 72.7 x 8.95 millimeters and a weight of 164 grams, the ZTE Blade 20 gets a 5000mAh battery with 18W fast charge, while it will sadly boot  Android 9 Pie with ZTE’s MiFavor UI out of the box and. When announced, the said device will hit the market in  Black and Peacock Blue at a price point yet to be determined.

There’s no word on when the ZTE Blade 20 will go official. However, there are indications it will launch, perhaps alongside the Blade A5 (2020) later this month. Precisely, the device might drop on October 18, in China as suggested by a recent Weibo post.

Previous Here are the 10 most used emojis by users worldwide

Next Samsung opens Android 10 One UI 2.0 beta program for Galaxy S10 in South-Korea