Chinese manufacturing giant, Xiaomi, recently released the Redmi 8 and Redmi 8A in China. After the conference, Lu Weibing, Redmi’s general manager confirmed that the Redmi K30 will come with a punch-hole camera. However, netizens were quick to remind him of something he said in the past. Someone asked, “I remember that you said that the hole screen is not mature”. In response to this statement, Lei Jun replied: “That was the beginning”. This implies that at the beginning of its development, the punch-hole solution was imperfect. 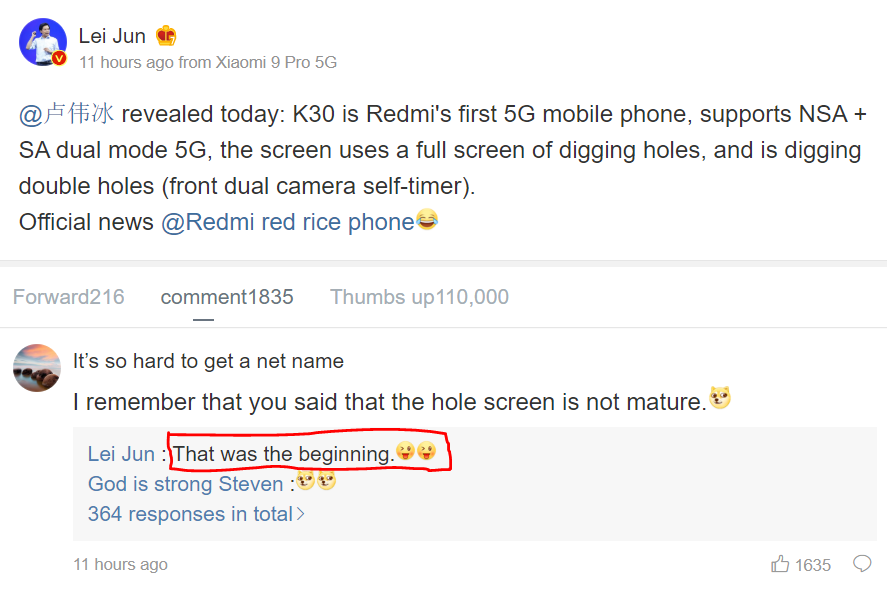 However, Redmi has perfected the punch-hole solution and the Redmi K30 series will launch with a “perfect” punch-hole camera. The Redmi K30 will be Redmi’s first 5G smartphone. We already know that Redmi will be the first brand to use the Snapdragon 700 series 5G SoC and it will be a high-end product. This smartphone will also support dual-mode 5G. This means that it will support both SA independent network and NSA non-independent networking.

This will be the first dual-mode 5G product of the Xiaomi ecosystem. Most 5G phones in the market use NSA non-independent networking. In fact, only Huawei, for now, have a dual-mode 5G phone. In addition, the Redmi K30 will come with a dual punch-hole display design. The dual front cameras will be at the upper left corner of the screen. There should be an improvement in its self-beauty, timer and face recognition features. As of now, there is no official release date for this smartphone. However, we believe that this smartphone could arrive in the first half of next year.

Next Huawei will be part of Germany's 5G network