Recently, Honor 20 Youth Edition appeared on TENAA and this smartphone will arrive on October 22. Today, Honor’s VP, Xiong Junmin, announced on Weibo that the Honor 20 4000 mAh battery will support 20W fast charge. It delivers 53% power in 30 minutes and its power-saving technology ensures that it meets users’ needs. 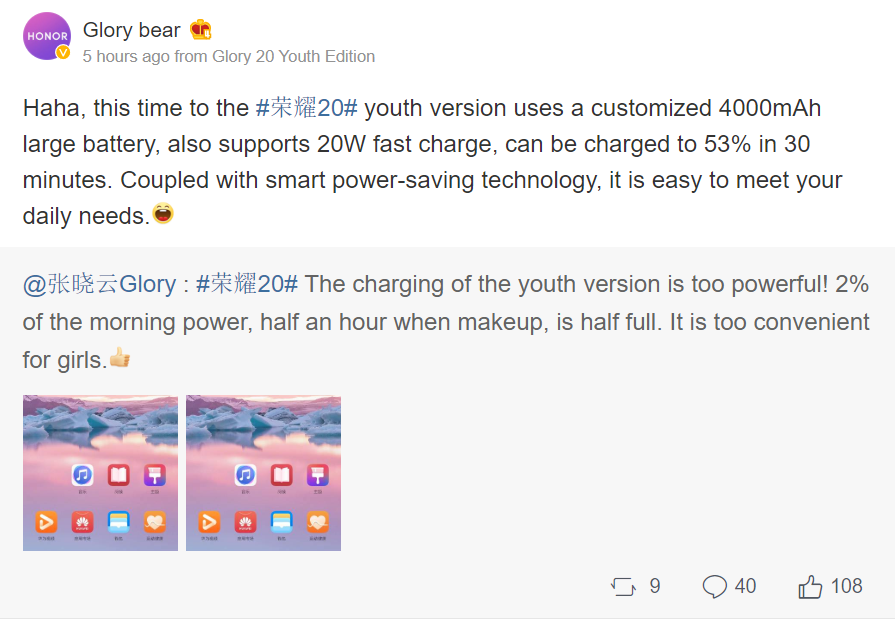 According to TENAA’s listing, the Honor 20 Youth Edition comes with a dimension of 157.2 × 73.2 × 7.70 mm and weighs 171.5g. Furthermore, it will support an on-screen fingerprint sensor and will be available in magic night black, Icelandic fantasy, and blue water jade. This smartphone will come with a Kirin 710F processor. It uses a 6.3-inch display with a resolution of 2400 × 1080. It has a built-in 4000 mAh battery, USB Type-C interface, and 3.5mm headphone jack.

In the camera department, this smartphone comes with a 16MP front camera as well as a 48MP+8MP+2MP triple rear camera setup. Its internal memory is expandable up to 256GB. Some of the specs of this smartphone are consistent with the Honor 20 Lite. The Honor 20 Lite was introduced in Malaysia back in May. What do you think about the Youth version of Honor 20? Let us know in the comment