The Huawei Mate X was revealed back in February, during the MWC 2019. We don’t need to say how the smartphone stole the public with its foldable display solution that is miles ahead of Samsung’s Galaxy Fold. Since then, we haven’t heard much about the handset, despite a couple of leaks and rumors. Huawei has been playing safe with this device, especially after the fiasco with Mate X rival. Now, however, it seems that we’re finally walking in direction to the launch of Mate X. Today, the Huawei’s president Alex Zhang shared the 5G download capabilities of the foldable handset. 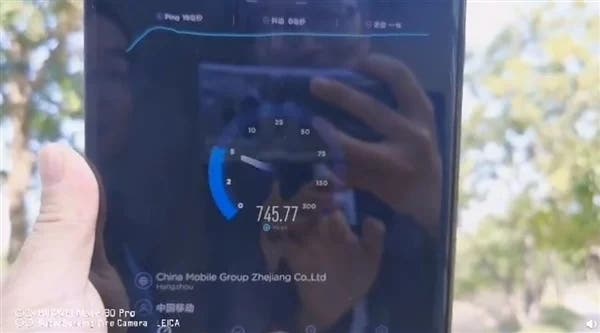 Alex used the Mate X to test 5G speed in Wuzhen. The image shows that the Mate X achieves download speeds of whopping 750Mbps. That’s an impressive result, that easily blows away some cabled internet connections. The Mate X will be the industry’s first 5G dual-mode smartphone that supports NSA and SA as well as dual sim card dual standby. That’s not a surprise, after all, we can say that Huawei has the best when it comes to 5G technology. Interestingly enough, Mate X is also compatible with mainstream 5G/4G standards worldwide.

We’re still waiting to see when this amazing piece of technology will reach the market. Reports have indicated a June launch, but it didn’t happen. Then, rumors started to spread about a September launch, but it also didn’t happen. Now, the rumor mill is pointing to an October 23 launch. The company’s major rival, in the foldable display segment, learned with its mistakes and is already available in the market. So, it is time for Huawei to push forward their offering. Although, we can understand, that the US ban will be imposing some limitations like the lack of Google Play Services.

Next Nokia 9.1 PureView reportedly delayed until 2020